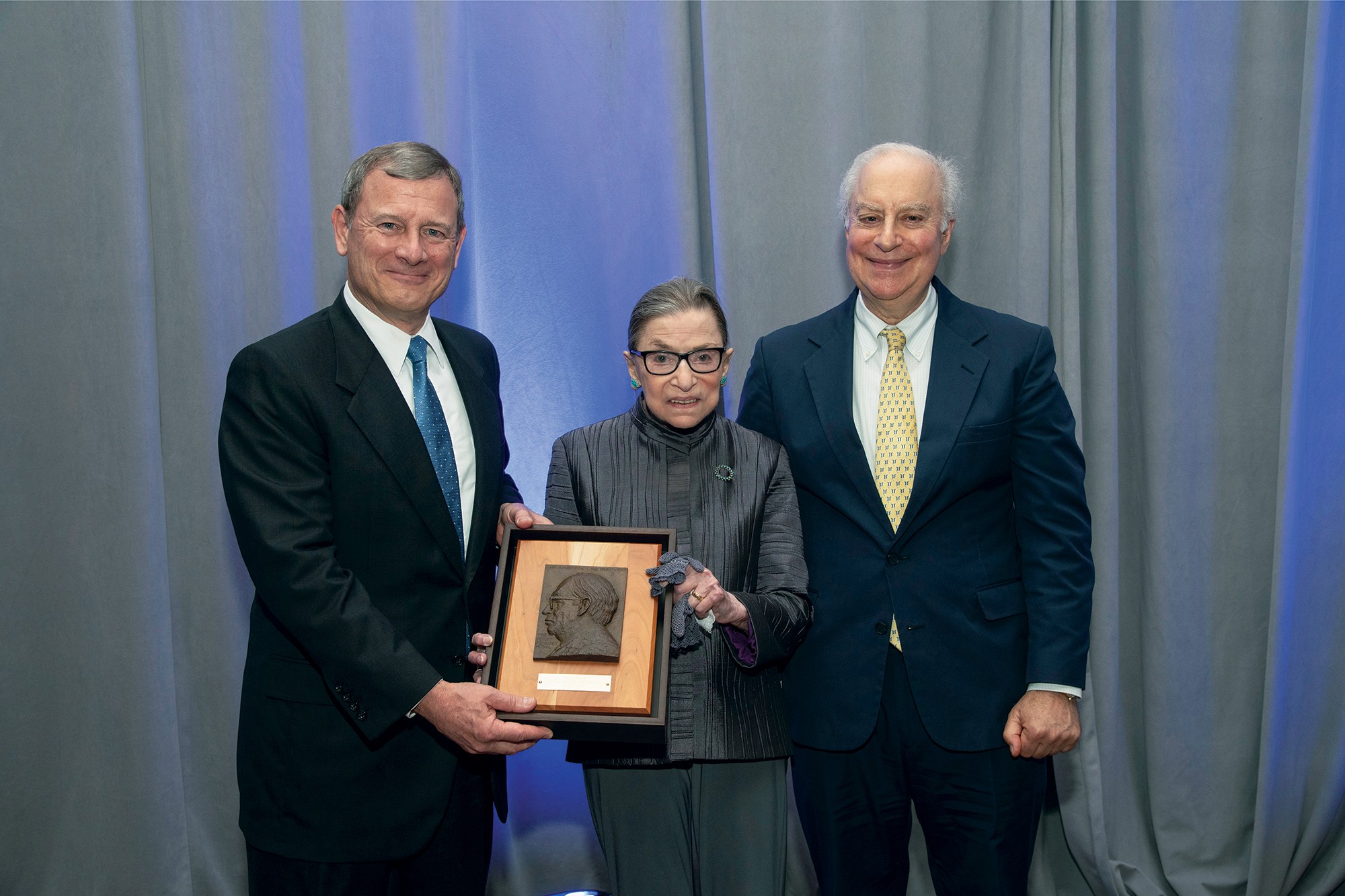 At the annual meeting of the American Law Institute (ALI) in May, Chief Justice John G. Roberts, Jr., presented the Henry J. Friendly medal to his colleague on the Court, Justice Ruth Bader Ginsburg. The warm exchange between two justices offers a welcome example of the professionalism that characterizes the relationships among the justices and can be so often overlooked. (For another peek into the relationships among the justices, see the “Lastly” column, about the Court’s dining traditions.)

David F. Levi, director of the Bolch Judicial Institute at Duke Law School (which publishes Judicature), presided over the event in his capacity as president of the ALI. Presented here are comments from the ceremony, courtesy of the ALI.

Good afternoon. Thank you, David. David, as you all know, is the one who got away, having served as a federal judge for 17 years until Duke Law School lured him in 2007 to become its dean.

And as he steps down from that role [in June], others will no doubt offer due accolades about what he has done for Duke. But I would like to just say how much I appreciate what Duke, under his leadership, has done for the courts and the law. And I am grateful, as well, for the role that David has taken on in leading the ALI.

My happy assignment this afternoon is to present The American Law Institute’s Henry J. Friendly Medal. We all know of the friendship between Judge Friendly and David Levi’s father, Attorney General and Chicago Law School Dean Edward Levi. But it turns out their family connections go back even further.

She, therefore, wrote directly to David’s great-grandfather, who was a distinguished professor of rabbinical literature at the University of Chicago. She inquired about Heinrich Graetz’s monumental 19th-century work, the History of the Jews.

David’s great-grandfather provided a crisp critique of the six-volume work. “Graetz’s history is not good. But it is the best we have. His facts are on the whole trustworthy, but his theories are not.”

So the tradition in the Levi and Friendly families of study, teaching, mentoring — and intellectual candor — predates the ALI by more than a quarter of a century.

Now in my view and that of many others, Judge Friendly was the greatest American judge never to serve on the Supreme Court. He ranks pretty high even without that qualification. He would have been a luminous justice, but he confided to friends that he would never have wanted to be Chief Justice. He wrote that he “would have absolutely hated . . . speaking at bar association meetings, maintaining contacts with Congress, and being a big wheel in Washington social life.”

Now this is the rarest of occasions where Judge Friendly was wrong. I can attest that one can be Chief Justice without being a big wheel of any kind.

Judge Friendly had a complete devotion to the rule of law. He believed that if you just worked hard enough to apply maximum intellectual power, and carefully enough to bring to bear informed judgment, you would arrive at the best answer to even the most difficult legal questions. He took total pleasure in that process. The rigor, intellect, and integrity he deployed as a master craftsman continue to inspire all of us.

Judge Friendly’s contemporaries recognized him as the intellectual leader of their guild. And over his three decades on the bench, Judge Friendly illuminated area after area of law with incisive analysis and crystal-clear prose. Lawyers and judges alike still give special weight to Friendly opinions because of how they persuasively explain, clarify, and mark the path of progress in the law.

Almost 60 years since he started writing them, Judge Friendly’s opinions retain a distinctive power to make us better lawyers and better judges. I’ll just give an example that bears directly on the individual who will receive the Friendly Medal today.

In 1973, Judge Friendly wrote for his court in Johnson v. Glick, which articulated a standard for when a prisoner could bring a Section 1983 claim. The opinion occupied just six pages of the Federal Reporter, but it became the leading authority on the subject until the Supreme Court stepped in to provide new guidance in light of its own subsequent precedent.

In the meantime, in an accolade only this audience could appreciate, Judge Friendly’s opinion garnered thousands and thousands of Westlaw citations because it was accepted throughout the country as the best statement of the law.

In 1984, about a decade after Judge Friendly authored Johnson, a relatively new jurist — Judge Ruth Bader Ginsburg — tried her hand at applying the Johnson standard. Apparently at the behest of her colleague Judge Robert Bork, who had joined her opinion, she sent a copy to Judge Friendly, noting modestly that she hoped her work “grasp[ed] correctly” Judge Friendly’s opinion in Johnson.

Judge Friendly replied that “[t]here is no doubt in my mind that you . . . captured precisely what I was endeavoring to say in Johnson v. Glick.” He later identified Judge Ginsburg as an upcoming star. And on that matter, characteristically, he was right.

Already at that time she had been a brilliant student at three different Ivy League institutions; the first tenured woman professor at Columbia Law School; head of the Women’s Rights Project at the ACLU, where she fought for the rights not just of women, but of all; and an esteemed circuit judge on the D.C. Circuit.

She has now served on the Supreme Court with distinction for 25 years, and we have gotten to know her on a more personal level as: a loving spouse of now-departed Marty, whom we dearly miss; mother to Jane and James; a woman who keeps unusually late working hours; a judge who works quickly, routinely issuing the Court’s first or second opinion every term, even when the Chief Justice assigns her a difficult case to try to avoid having everyone else appear slow by comparison; and a cultural icon who knows much about music, nothing about football, and more than is reasonable about jabots.

Ruth, I am very happy to have the opportunity to participate in this effort to increase your public profile. It is humbling to be your colleague and gratifying to be your friend. And it is my great pleasure to present you the 2018 Henry J. Friendly Medal. 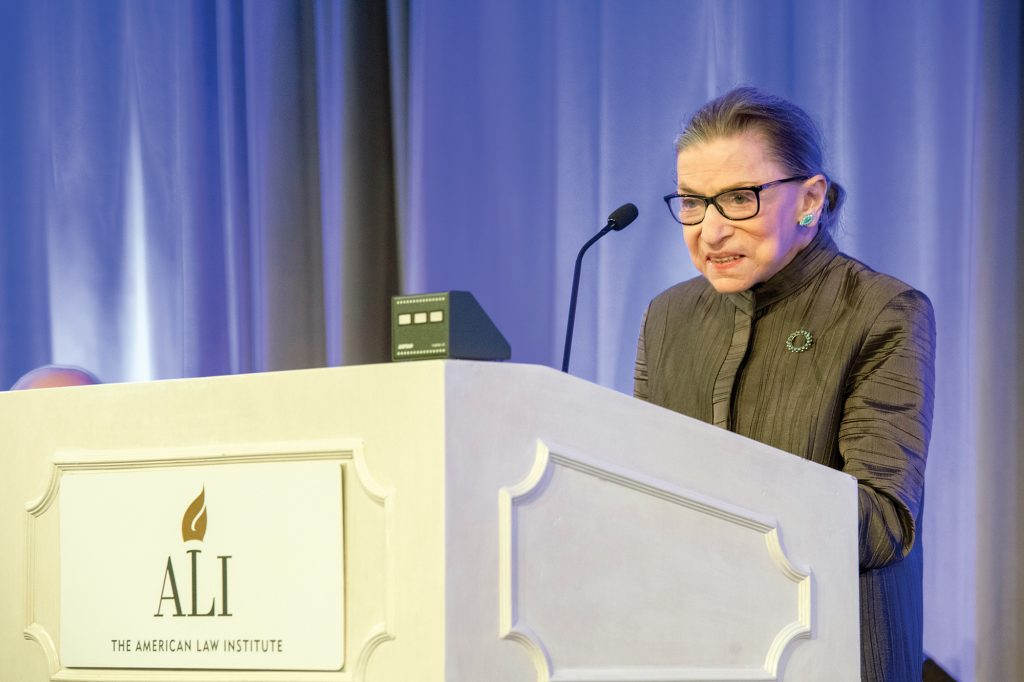 Receiving the Henry J. Friendly Medal is a huge honor. And receiving it from my Chief is a pleasure beyond measure.

May I tell you of my first impressions of Judge Friendly. In the Fall of 1959, I began a clerkship with Judge Edmund L. Palmieri, seated in the Southern District of New York. The new Second Circuit Judge was appointed the same season and was greatly admired for his towering intellect, also what Michael Boudin called his immense practicality. Together with other Southern District law clerks, I sometimes attended Second Circuit arguments when Judge Friendly was on the bench. He didn’t ask many questions, but the ones he asked were penetrating.

In the second year of my clerkship, my husband, Martin Ginsburg, aided in a case argued in the Second Circuit. Judge Friendly was on the panel, so I came along to observe. It was a complex tax case involving corporate bonds. All was going well for Marty’s side until Judge Friendly asked: “Is the bond indenture in the record?” It was, and Marty immediately understood that the Judge had zeroed in on the best argument for the government, but one the government did not make. Friendly wrote the opinion for a unanimous panel holding for the government.1 The Supreme Court reversed,2 but Marty had little doubt that Judge Friendly had it right.

Judge Friendly had two careers when he left practice: He was a sage judge and a learned scholar. Both as a law teacher and as a judge, I have several times cited his insightful articles, most often, In Praise of Erie — And of the New Federal Common Law.3 The opinions he wrote on a wide range of subjects and his extracurricular writings are his legacy. They will endure to guide the bar and bench for generations.

Judge Friendly’s story needed to be told, and I am glad my law school classmate, David Dorsen, devoted six years of his life to the biography published in 2012, titled Henry Friendly, Greatest Judge of His Era. Judge Richard Posner, who wrote the foreword to Dorsen’s book, called the biography immensely illuminating. Other readers have similarly praised the volume.

The federal judiciary, to which Judge Friendly was devoted, faces a threat lawyers who care about the health and welfare of our federal courts can help counter. When Justice Scalia was nominated in 1986, the vote for his confirmation was unanimous. Seven years later, when I was nominated, the vote was 96-3. Not one question was asked about my affiliation with the American Civil Liberties Union as board member, general counsel, and co-founder of the ACLU’s Women’s Rights Project. In the Senate Judiciary Committee, Senator Orrin Hatch was a leading supporter.

It has not been that way for more recent appointees. The Chief and Justice Samuel Alito drew negative votes from a number of Senate Democrats, votes that would have been cast for them had merit been the principal criterion. The same partisanship continued, this time by Republicans, for the nominations of Justice Sonia Sotomayor and Justice Elena Kagan. My hope is that, one fine day, our Congress will return to the bipartisanship that prevailed for my nomination in 1993, and Justice Stephen Breyer’s in 1994. Such a return would enable our Congress to engage again in lawmaking and fulfilling other responsibilities for the good of all of the people law exists (or should exist) to serve.

A word about the notoriety I have recently attracted. It is amazing that at my advanced age, 85, so many people want to take a picture with me. T-shirts, tote bags, bibs, mugs, closet fresheners, coloring books, even tattoos bear my name and face. The tumblr that started it all was launched by a second year student at NYU Law School. She detected a certain resemblance between the rapper, the Notorious B.I.G., and me: We were both born and bred in Brooklyn, New York. I suppose young people latched onto me because they yearn for something advancing society’s welfare to believe possible. And I fit that bill because I had the good fortune to be alive and a lawyer when society was prepared to accord equal citizenship stature to women. Helping to propel that change was enormously satisfying.

Finally, a few words about the ALI. My affiliation with the Institute, as counsel member and adviser to the Restatement of Judgments, provided the best learning experiences I have had since law school. The Supreme Court, as other courts, state and federal, often turns to Restatements and other ALI publications for enlightenment and guidance. The Supreme Court has done so since 1933, when an opinion of the Court cited a tentative draft of the Restatement of Trusts.4 In common with jurists across the U.S.A. and abroad, I look forward to continuing aid from ALI products.

A thousand thanks for an award I treasure and every best wish for the discussions and deliberations ahead.