A little less stiff, and no tangents, please. 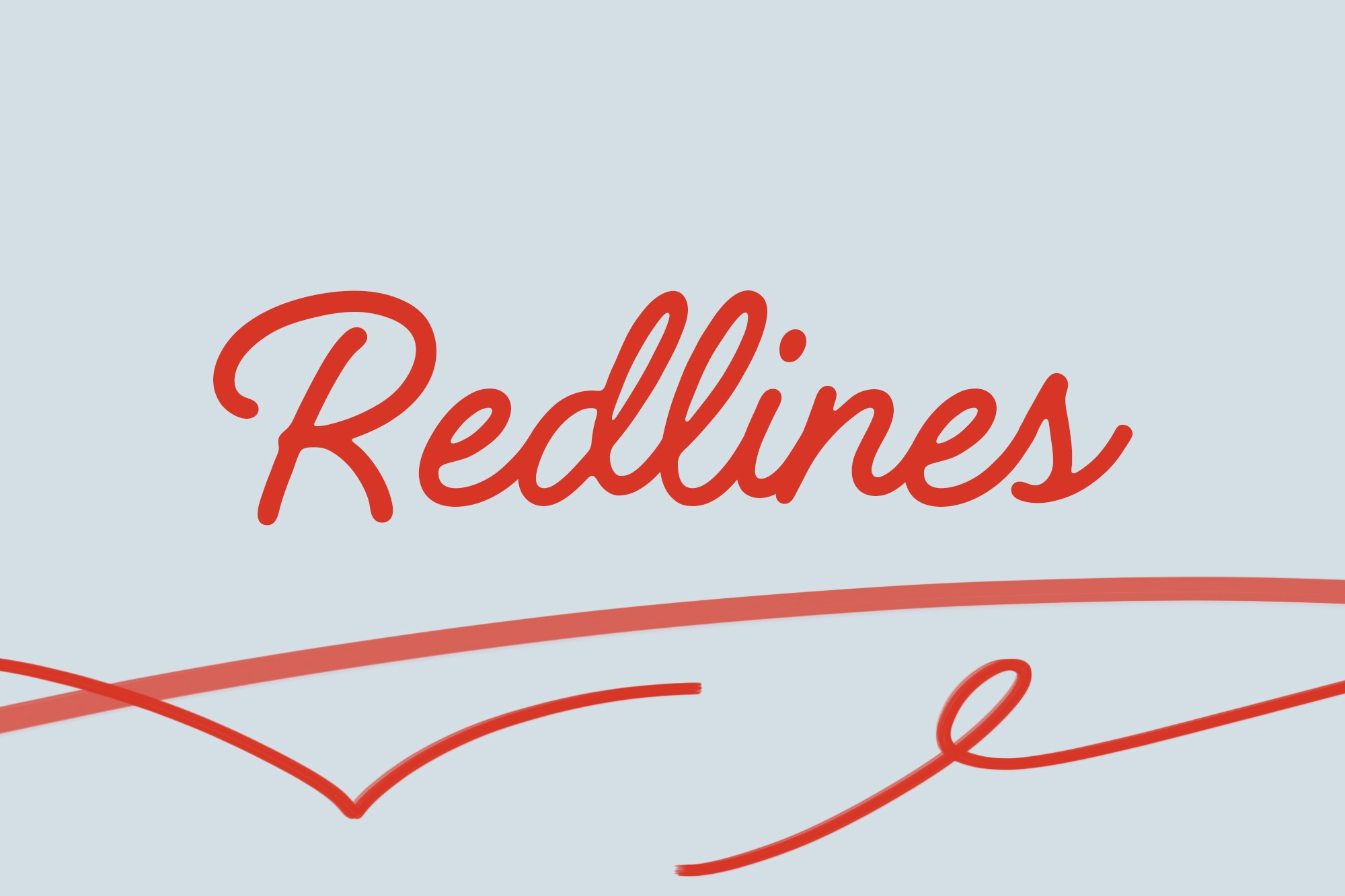 Our writing guru, Joseph Kimble, goes after some common blemishes. In the original opinion, he notes, the second half of the first sentence seems pointless. So does the third sentence, since the petitioner’s time for a direct review ended in 2008. The Redlined version keeps both to make some editing points, but they are omitted — and other adjustments are made — in the revised (Better) version below.

The Antiterrorism and Effective Death Penalty Act of 1996 (“AEDPA”), which was enacted on April 24, 1996, requires that federal courts give greater deference to a state court’s legal determinations. The AEDPA also amended 28 U.S.C. section 2244, to require that a strict one-year period of limitation shall apply to an application for a writ of habeas corpus by a person in custody pursuant to the judgment of a state court. However, if direct review of a criminal conviction ended prior to the AEDPA’s effective date, a prisoner has one year subsequent to the April 24, 1996 effective date to properly file a habeas action. Burns v. Morton, 134 F. 3d 109, 111 (3d Cir. 1998). In this case, the applicable starting point to examine the limitation period is the latest date on which the judgment of sentence became final, either by the conclusion of direct review or the expiration of the time for seeking such review. See 28 U.S.C. § 2244(d)(1).

The Antiterrorism and Effective Death Penalty Act of 1996 amended 28 U.S.C. § 2244 to set a strict one-year limitation period to apply for a writ of habeas corpus by a person in custody under a state-court judgment. For convictions after 1996, as in this case, the starting point to examine [determine?] the limitation period is the latest date on which the judgment of sentence became final — either because the direct review ended or because the time for seeking it expired. See 28 U.S.C. § 2244(d)(1). 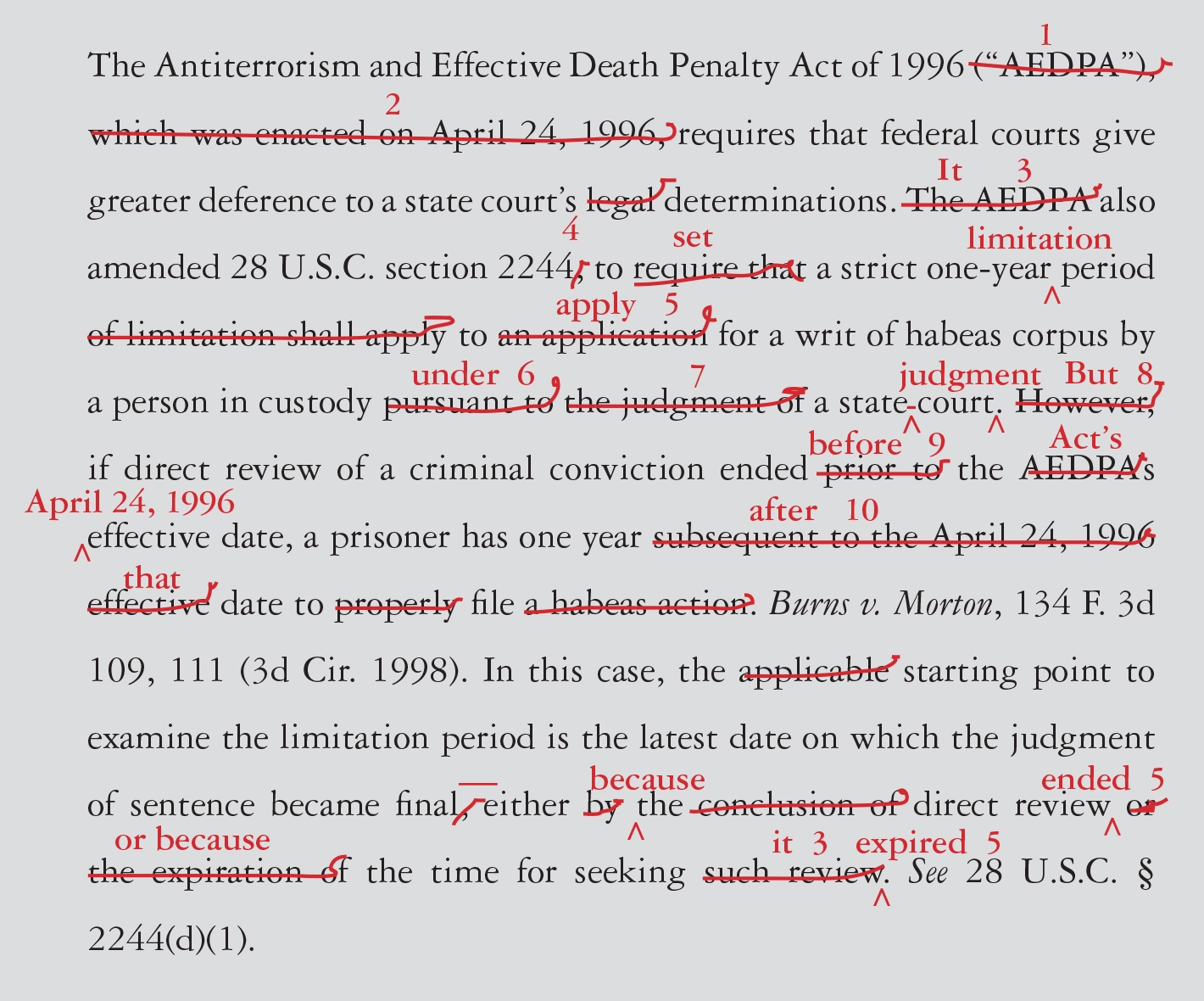 1. No need to create this ugly initialism. The opinion mentions a state statute and this federal statute. If there’s any confusion about a later reference, this one could be “the federal Act.”

2. Unnecessary at this point.

3. Fear not pronouns — as long as the antecedent is clear.

5. Prefer verb forms to nouns. (Besides, the doubling of apply and application is infelicitous.)

7. An unnecessary prepositional phrase. Watch for the word of as a tip-off.

8. But is almost always better as a sentence-starter.

Joseph Kimble is an emeritus professor at WMU–Cooley Law School. He is senior editor of The Scribes Journal of Legal Writing, the editor of the Plain Language column in the Michigan Bar Journal, and the author of three books and many articles on legal writing (not to mention a children’s book). He served as drafting consultant on the projects to restyle the Federal Rules of Civil Procedure and Federal Rules of Evidence. Follow him on Twitter @ProfJoeKimble.