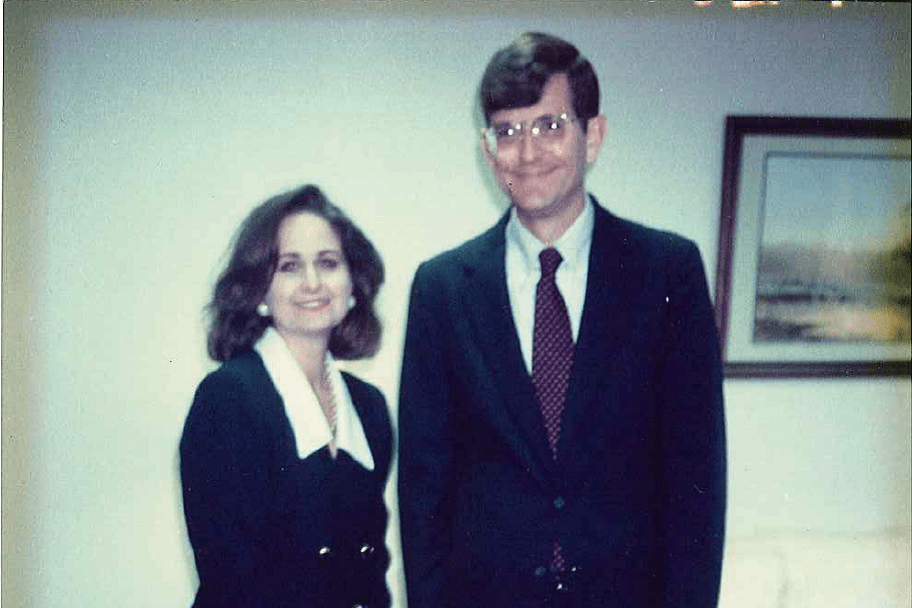 (Judge Jennifer Elrod is is pictured above with Judge Lake on the day he swore her into the Texas bar in 1992; photo courtesy Jennifer Elrod.)

Born on the last Independence Day of World War II, Judge Sim Lake is a patriot and a standard bearer of the best practices of a trial judge. Judge Lake graduated from Texas A&M University in 1966 and went straight to the University of Texas School of Law, where he graduated first in his class in 1969. From 1970 to 1971, he served in the United States Army as a JAG Corps prosecutor stationed in Vietnam. During this time, his roommate was a JAG Corps defender who worked to defend the same people Judge Lake was trying to convict. No doubt this contributed to his insistence years later on collegiality from lawyers practicing before him. It also gave him one of his many quotable sayings: “All I ever needed to know about being a judge I learned in the Army Field Manual.”

After his service, Judge Lake practiced law in the Houston office of what was then known as Fulbright & Jaworski LLP (now Norton Rose Fulbright), where he became a partner. President Reagan appointed him as a United States District Judge for the Southern District of Texas in 1988. Another former law clerk profiled Judge Lake for The Federal Lawyer magazine just after his 20th year on the bench. Now that Judge Lake is approaching his 30th “benchiversary,” it is time to once again pay respect to this exemplary trial judge.

In his nearly three decades on the federal bench, Judge Lake has decided more than 12,000 civil and criminal cases and has presided over nearly 800 trials. That is more than 10,000 hours in the courtroom — not to mention time in chambers drafting opinions and orders. But Judge Lake is so much more than the sum of his impressive case statistics. Judge Lake is a mentor who teaches lawyers and law clerks how to be better lawyers and sometimes even how to be trial judges themselves.

On the bench, Judge Lake is an icon. He is disciplined and a creature of habit. His regular schedule includes coffee with his law clerks before court, a morning on the bench, daily exercise, and a sack lunch at his desk, before heading back to court. He runs his courtroom according to a tight schedule — he always starts on time and sometimes begins a few minutes early. A well-known lawyer once walked into trial a few minutes late to find opposing counsel at their table, the court reporter at her station, the witness on the stand, the jury in the box, and Judge Lake at the bench, all silent and ready to begin. This lawyer was never late again, and Judge Lake never had to say a word about it. While a stickler for punctuality, Judge Lake is patient with lawyers and frequently reminds the law clerks that judges should never forget what it is like to be a lawyer themselves. He never belittles anyone, and he instructs confused lawyers with gentle and dry-witted reminders and a twinkle in his eye.

He also knows and teaches that the best case-management tool is a firm trial date — a lesson I took to heart when managing a busy trial docket myself. During trial, he is focused and follows a careful schedule, making sure that the jury is in the box at the appointed time and handling all legal matters before and after each day’s presentation of evidence. He declines lunchtime and evening social and speaking engagements during trial so he can stay focused and on time. During hearings, he often rules from the bench and makes the transcript his order, never allowing motions to pile up in chambers.

Judge Lake’s trial management methods are so good that they have been affirmed by the Supreme Court of the United States. At oral argument during the appeal of former Enron executive Jeffrey Skilling’s conviction, the attorneys [now D.C. Circuit Judge Sri Srinivasan and Michael Dreeben] argued about whether Judge Lake’s tightly run five-hour voir dire was sufficient for such a highly publicized case. As Chief Justice Roberts stated during oral argument, “if you have an experienced judge who goes through this all the time,” it is reasonable for him to use his experience and it is “better to let [him] do it than to have the lawyers have three weeks to do it.” The Court upheld Judge Lake’s voir dire.

The Enron litigation is hardly the only high-profile case to come before Judge Lake. Others include a high-profile murder case he heard during my clerkship, which was later featured in a movie, and a First Amendment case involving videos depicting extreme cruelty to animals. Judge Lake took the utmost care to resolve those cases carefully and according to the law — the same approach he applies to what some might see as small, routine cases. He reminds his clerks regularly that every case is very important to the parties and should be treated with the utmost respect and care.

Judge Lake has written over 1,300 opinions; about 200 of these are published. Even though he believes that most cases should not be published, he crafts his opinions with painstaking care and encourages his law clerks to write precise memos. During my clerkship, he was fond of asking the law clerks, “What do you mean here?” when we had written around an issue instead of confronting it head on. Occasionally, he would hold an impromptu writing clinic in chambers where we discussed a well-written brief or opinion; I have borrowed this practice. He also taught us the value of using a ruler in proofreading a document — a lesson I have taught my legal-writing students, law clerks, and interns. True to his no-frills form, we had to type everything in no-frills Courier New font.

Judge Lake not only teaches his law clerks, but he has taught many in the profession lessons of collegiality, professionalism, and practical lawyering. In private practice, Judge Lake mentored young attorneys; in fact, Fulbright & Jaworski used video recordings of Judge Lake’s instruction for years after he left the firm. Among the practical lessons he taught me as a young lawyer was what to take to an accident investigation — at minimum, a ruler, a tape measure, and a camera (before the days when phones had cameras!). Another lesson he taught me was how to encourage collegiality among attorneys in court. For attorneys who fail to resolve discovery disputes with integrity and civility, Judge Lake keeps a special docket with weekly hearings at 8 a.m. or at 4 p.m. on Fridays. Like the trial court version of Santa’s naughty list, this incentivizes good behavior all year long.

More than anything, Judge Lake models how to be a great trial judge. It is not surprising, then, that three of his former law clerks have become trial judges: Judge Dan Hinde, in the 269th District Court of Harris County, Judge George Hanks, in the U.S. District Court for the Southern District of Texas, and me. Although I now sit on an appellate court, I started as a state trial judge in Texas, serving in the 190th District Court of Harris County. The three of us strive to keep our courtrooms as collegial, our schedules as disciplined, our opinions as crisp, and our law clerks as well-mentored as Judge Lake does his.

Judge Lake is fond of saying, “Never let the urgent crowd out the important,” and he lives out this principle in and out of the courtroom. He always emphasizes the importance of family and community, and he models this priority with his beloved wife Carol, his children, and now his grandchildren. He considers his law clerks part of his extended family, and has sworn me and many other law clerks into the Texas bar. On one memorable day, he came into my office to tell me that my co-clerk would be getting married that afternoon, and asked me to help make the day special. I brought some flowers, and in a moment of true self-sacrifice, Judge Lake lent my co-clerk his Aggie class ring for the ceremony he performed.

I could go on for many more pages about the lessons Judge Lake taught me and my gratitude for having such an excellent mentor. But instead, I will take the advice Judge Lake shared at my own investiture ceremony: “Guard against saying too much, especially when you’re overworked, tired, or irritated.” Although I am none of these, I will stop here, and, along with many others who have been mentored by this truly great trial judge, look forward to his 40th “benchiversary.”