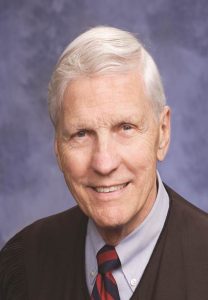 The Honorable Rudi M. Brewster dedicated his life to justice, integrity, professionalism, and service. I had the privilege of working with him for 37 years. He permitted me, a new lawyer, to try jury cases on my own. He encouraged me, a junior partner, to apply for the federal bench. He supported me, a young chief judge, with his willingness to help. Over this time, I witnessed his eternal optimism, infectious enthusiasm, and commitment to public service. I am honored to share his story.

Intelligent, fair, and witty. These words describe the judicial career of Judge Rudi Brewster. Nominated to the federal bench by President Reagan, he received his commission in a record pace less than one month later on June 15, 1984. President Reagan personally called to nominate him. “Mr. President!” Brewster exclaimed as he stood, ever the military man, at attention. “Thank you for the nomination, but I have a request of you. I would like to meet you.” Sure enough, President Reagan invited Judge Brewster and his family to the White House to thank him for his service to the country. Years later, Judge Brewster visited the Reagan Presidential library and obtained President Reagan’s handwritten note and other materials that reflected his visit to the White House.

His commendable service included his work as a captain, JAG officer, and pilot in the United States Navy and Naval Reserve based in San Diego. Following active duty, he enrolled in Stanford Law School and graduated in 1960. He returned to San Diego to practice aviation law. He was a superb and innovative trial lawyer and my mentor at the law firm. Dedicated to a search for the truth, he once brought an entire Cessna aircraft seat into the courtroom in a wrongful death case. He won the case.

On the bench, Judge Brewster demonstrated his lifelong commitment to justice. He masterfully presided over a busy docket. He was known for his consummate civility, intellectual curiosity, and unflinching independence. For example, he ruled against the National Football League and for a former player claiming disability well before others brought similar lawsuits. A registered Republican, he ruled in favor of a group seeking to exercise its First Amendment right to protest at the Republican national convention. He ruled against the federal government and for a city challenging the scope of environmental water treatment regulations. These cases illustrate his commitment to the independence of the judiciary and the rule of law. But he never took himself too seriously or lost his sense of humor. He referred to his work in the environmental case as being knee deep in sewage.

His management of complex civil litigation, especially patent cases, continued after Judge Brewster took senior status in 1998 because he loved the challenge of an invention. He also liked field trips to view the evidence. In a patent case involving gravel for an aquarium, he visited the manufacturer of a fish tank to see the invention. He was respected: the bar honored him with its Intellectual Property Award, the State Bar inducted him into its Hall of Fame, and the American Inns of Court gave him the Professionalism Award for the Ninth Circuit. In sum, he had an ideal judicial temperament and desire to help others.

Judge Brewster’s guidance to others was evident in all aspects of his life. As a mentor, he influenced the lives of his staff, law clerks, lawyers, and colleagues with his integrity and professionalism. As a judge, he loved working with his law clerks and treated them like his extended family. He referred to their children as his “grand-clerks.” They remember their beloved judge, his dedication to fairness, and his sense of humor–like naming his briefcase his “happy bag.” He often used humor in job interviews by quizzing his law clerk applicants on whimsical issues such as the name of Napoleon’s horse or the length of the Gettysburg Address. Above all, he was their teacher, like mine, in life’s important lessons.

One of life’s important lessons was public service. Judge Brewster’s commitment to public service extended beyond the court room. He taught by example. He held mock trials, read to minority elementary students once a week, and fostered award-winning educational programs. To illustrate equal justice, I recall when he dressed as Abe Lincoln with beard, top hat and coat and recited from memory the Gettysburg Address. You could hear a pin drop when he began, “Fourscore and seven years ago.”

Judge Brewster’s public service extended to his musical talents. He played the clarinet– with me at the piano– in our duet group Judicial Harmony. We performed at nursing homes and at a veteran’s hospital to bring joy to others. We played classical, jazz, Broadway, and other tunes, but he much preferred Bennie Goodman or John Phillip Souza. He was always planning our next gig. During our last performance, he brilliantly played “When the Saints Go Marching In.” Little did I know that he, the dedicated public servant, would be marching in so soon. He continued to serve the court until his passing at age 80 on September 7, 2012. As a mentor, he was brilliant, compassionate, and caring. I fondly remember– and share with others – his dedication to his country, community, and court.