A Pilgrimage: Commemorating the Magna Carta 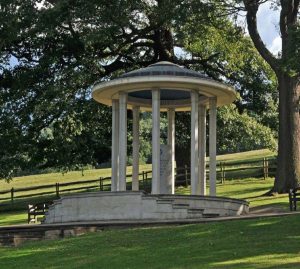 The 800th anniversary of the signing of the Magna Carta, justly regarded as the foundation of constitutional liberty in the English speaking world, will be celebrated in 2015. Awareness of the anniversary recalls to me my visit to Runnymede, the meadow in England where King John and his Barons signed the Great Charter, in the summer of 1979, shortly before President Jimmy Carter, with the advice and consent of the Senate, signed my Commission as a federal judge on September 26th of that year.

This is how it happened.

In the spring of 1978, there were two (2) vacancies on the Eastern District of Michigan bench, and three (3) new judgeships on their way to approval.

According to custom, Senator Donald Riegle, a Democrat, as the Senior Senator from Michigan, had the privilege of recommending to President Jimmy Carter, also a Democrat, the persons to fill the vacancies. In March of 1978, Senator Riegle expressed his intention to recommend nominees for the new judgeships at the same time as his recommendation for the vacancies. The Senator to assist in making his choices appointed a merit selection committee to recommend candidates to him. The committee, after a detailed questionnaire and personal interviews, recommended 16 candidates.

Senator Riegle then interviewed the 16. He interviewed me twice; he had been told I lacked judicial temperament, which was probably true. Whatever the Senator thought were my shortcomings, they obviously did not dissuade him from recommending me.

In May of 1978, Senator Riegle announced that he would be recommending Julian Abele Cook, Patricia Boyle, Stewart Newblatt, Anna Diggs Taylor, and myself to the President for appointment as district judges. He said that Cook and Boyle would be recommended for the two (2) vacant judgeships, and when the three (3) new seats were authorized, Newblatt, Taylor, and I would be recommended to fill them. The nominations of Cook and Boyle were sent to the Senate shortly thereafter by the President and quickly confirmed by the Senate.

The new seats were created in the spring of 1979. President Carter nominated Newblatt, Taylor, and myself in May of 1979. Newblatt and I had our confirmation hearings before the Senate Judiciary Committee at the end of July; Taylor’s hearing was deferred until the fall. At the same time as Newblatt and I were nominated, Judge Cornelia Kennedy, then a district judge, was nominated for a vacant seat on the Court of Appeals for the Sixth Circuit on the recommendation of Attorney General Griffin Bell, who also followed the recommendation of a circuit-wide merit selection committee.

The confirmation hearing for Newblatt and myself in front of the Senate Judiciary Committee was a thrill to me and my family, who had come to Washington to watch the proceedings; it was uneventful. By contrast, Judge Kennedy’s hearing, a week before our hearing, was quite contentious, and after a day of testimony pro and con, put over to September.

The adjournment of Judge Kennedy’s hearing raised the ire of Senator Strom Thurmond of South Carolina. The Senator, at the end of July, blocked the Judiciary Committee from sending 23 then-pending nominations to the Senate floor, which included Newblatt’s and mine.

I learned of the block by a telephone call from my late wife, who heard of it on a newscast the day of Thurmond’s pique. She said to me, “you thought you were about to be a judge” (I had completely closed down my law practice); well, you’re not. Your nomination has been put on hold, and we are going to London for a week. I have just made the reservations.”

When I got to London, and looking forward to taking the bench, I thought it right and proper for me to pay my respects to the Magna Carta by a visit to Runnymede; a sort of pilgrimage.

Paragraphs 39 and 40 of the Charter spell out the significance of King John’s promise to his subjects, which to this day still hold, albeit in different words:

No free man shall be seized or imprisoned, or stripped of his rights or possessions, or outlawed or exiled, or deprived of his standing in any other way, nor will we proceed with force against him, or send others to do so, except by the lawful judgement of his equals or by the law of the land.

To no one will we sell, to no one deny or delay right or justice.

The 15 June 1215 is rightly regarded as one of the most notable days in the history of the world. Those who were at Runnymede that day could not know the consequences that were to flow from their proceedings. The granting of Magna Carta marked the road to individual freedom, to parliamentary democracy and to the supremacy of the law. The principles of Magna Carta, developed over the centuries by the Common Law, are the heritage now, not only of those who live in these Islands, but in countless millions of all races and creeds throughout the world.

To me, I thought I could best express the solemnity of my visit by using public transportation. This way of travel would emphasize in a personal way my commitment to my new role in the life of the law. A look at the route, first by tube and then by bus to Egham, the closest town to Runnymede, suggested it would be a very long walk to the meadow. However, the American Bar Association’s recognition of the Great Charter in the form of a monument dedicated during the Association’s 1957 annual meeting in London was only a very short walk from the bus stop. I chose the monument as the proper place to pay homage.

My tube and bus ride to Egham, and then my walk to the monument was to me a thoughtful journey. The monument is described by Wikipedia:

Situated in a grassed enclosure on the lower slopes of Cooper’s Hill, this memorial is of a domed classical style, containing a pillar of English granite on which is inscribed “To commemorate Magna Carta, symbol of Freedom Under Law.” The memorial was created by the American Bar Association to a design by Sir Edward Maufe R.A., and was unveiled on 18 July 1957 at a ceremony attended by American and English lawyers.

The visit was a moving moment to me, and a fitting way to begin my new responsibilities, and would always be a reminder of the importance of my role, albeit shared by many, of assuring respect for the individual in the law.

There turned out to be a small flaw in all this: the monument is adjacent to a cow pasture, the fence of which had broken down. What I saw was clear evidence that the cows had also visited the site. Sadly, the Association had failed to follow up the dedication with the presence of a custodian.

For the last 34 years I have presided over a multitude of civil and criminal cases. While it is not for me to say that I have in those years followed the promises made by King John to his Barons, I can safely say I have never heard a word to the contrary.

To commemorate the anniversary of the Magna Carta, the Association will hold its 2015 Annual Meeting in London, and as part of its visit, rededicate the monument, which I am told is now fully protected from intrusion by its bovine neighbors. Also, in 2014, one of the four counterparts of the Great Charter will be brought to the United States for public display, providing a more convenient way to pay homage to a document whose importance to constitutional liberty cannot be overstated.