As society evolves, should state courts likewise evolve? Should courts replace or, at a minimum, augment their traditional roles in the adversarial system that defines our nation’s judicial process? Should courts remain impartial, detached third-party arbiters who dispassionately dispense justice between and among litigants according to precedent and similarity? Or should courts become more involved in the problem-solving arena, requiring judges to mete out more subjective and individualized ramifications for litigants?

These are a few of the questions presented in Victor E. Flango’s and Thomas M. Clarke’s Reimagining Courts: A Design for the 21st Century, an important book discussing needed reforms in our American judicial system, written by two individuals who have been privy to the inner workings of state court systems for a number of years.1

The book’s title begs a question and presupposes that a problem exists in the way courts are currently formulated. In chapter 1, the authors explain why courts need to be redesigned (pp. 19-26). The answer becomes apparent when the authors note that courts generally “treat all the different adjudicatory processes . . . as if they were adversary proceedings, where every case is a contest and every case has a realistic chance to go to trial” (p. 19). Obviously, not all cases go to trial. Statistics show that a vast majority of cases settle. Moreover, the authors note, recent trends demonstrate that society has begun placing issues before the court that traditionally have been handled elsewhere in society (e.g., within the family, the school, the church, and government agencies) (p. 22).

The authors next describe the work state courts do, observing that “at least 50 percent of the caseloads are traffic cases, about 10 percent are small claims, and the remainder includes criminal misdemeanors, family law, and other civil cases” (p. 28). While these statistics do not necessarily reflect the work of all courts, according to Flango and Clarke, they do inform the necessary changes to the processes courts use to resolve these cases.

In the authors’ estimation, the better approach is a “triage” system based on the premise that:

The courts should not be passive, waiting for lawyers to decide what they want to do and when they want to do it or waiting for self-represented litigants to figure out how to navigate the courts. Rather, courts need to take control of cases early in the process and manage them actively until disposition. (p. 37).

Clarke and Flango are quick to highlight that the courts should view those appearing before it — as well as the public in general — as “customers” (p. 11)who should be afforded choice basedon the case-management strategy thelitigants want and the status of the issuesin the case (p. 4). But such choice isafforded after triage, when judges analyzeand place cases on one of four case-processing tracks: (1) the traditional courtadversary process; (2) a disposition-oriented process to handle high volumeof “ordinary” cases; (3) a nonadversaryprocess for cases requiring the solutionto a problem; or (4) an administrativeprocess (p. 38).

In chapter 4, the authors describe and discuss the first track in the triage system: “The adversary process, with its emphasis on trials, is critical to our conception of justice in the United States” (p. 54). Flango and Clarke posit, however, that the adversary process should be reserved for trials, which should only be reserved for cases that are “trial worthy” (p. 60).

In my view, introducing what appears to be a “weeding-out” process to determine which cases are “trial worthy” seems dangerous and somewhat inequitable, primarily because it lends itself to subjective and selective considerations of which citizens’ legal matters are worth Seventh Amendment protections and other access to the courts. The authors do offer a nonexhaustive list of certain criteria to consider when considering a case’s worthiness for trial, including whether a dispute involves:

In exact or analogous circumstances outlined above, judges serve as passive “umpires” who “just call balls and strikes,” exercising impartiality. This, the authors declare, is the “heart and soul of the judicial process” (p. 62-63).

As the authors highlight, the public expects that everyone has a right to go to trial. This, in my opinion, renders the notion that only “trial-worthy” cases should receive the benefit of a trial all the more questionable. Importantly, however, the authors offer an “antidote” to the reality that very few litigants see their cases — trial worthy or not — go to trial: “The remedy here . . . is to have shorter, more expedited, less costly trials,” requiring courts to: (1) limit trials to one or two days; (2) adopt a fixed trial date; (3) expedite pretrial processes; (4) promote evidentiary agreements to narrow issues at trial; and (5) make the expedited track voluntary (p. 66). These suggestions will assist the adversarial process in becoming more effective and inclusive.

Chapter 5 turns to the second track, the “Dispositional Process” (pp. 70-84). Flango and Clark place within this gamut more standard cases appearing on “[a]ssembly-line or ‘cattle-call’ dockets,” whether civil or criminal, where the law is clear “and the key determination is whether the facts in question meet the standard of the law” (pp. 70-72). For example, cases involving traffic violations, small claims, and family law, as well as criminal cases wherein a plea agreement is proposed to the judge, are appropriate for the dispositional process.

In cases directed toward the dispositional track, the judge serves as either an “adjudicator” or a “task performer.” Serving as adjudicator involves deciding cases, whereas being a task performer emphasizes processing litigation and maintaining smooth court operations. According to the authors, these roles are two sides of the same coin: The job of the judge in either case is to arrive at a swift and consistent case disposition while applying judicial procedure in doing so. Importantly, in arriving at a swift resolution of a dispositional case, judges must give litigants a voice and handle the case with neutrality, trust, and respect (pp. 78-79). The authors define each of these terms in chapter 5.

Touching on other requirements for the dispositional track, Flango and Clarke instruct that judges and staff exhibit procedural fairness, that courts be flexible, accessible, and, if appropriate, virtual, and that effectiveness be determined according to expedition and timeliness, cost, and procedural justice. The authors also note that courts must carefully engage in an appropriate consideration of “how much process is due” (pp. 80-82). While this consideration is nothing new in constitutional jurisprudence and generally applies in all judicial processes, it is especially important in the context of dispositional cases, where the measure of success is speed and consistency.

In chapter 6, Flango and Clarke discuss the “administrative process,” where triage directs matters for “the mechanical application of rules to routine cases” (p. 87). The authors quote a federal judge as contending that this process places judges in the role of administrators who are being asked “to solve problems for which they are not institutionally equipped or not as well equipped as other available agencies” (pp. 85).

Administrative-process matters include those that “go to court not to receive court adjudication but simply to have a record made that a transaction was legally concluded” — naturalization ceremonies, name changes, marriages, and verifying vehicle insurance and registration as part of traffic cases. These processes, according to the authors, can be handled by administrative tribunals or administrative units supervised by the courts.

The crux and most informative part of the book is the problem-solving process and the implications thereof discussed in chapters 7 and 8. Here the authors outline a process by which courts have begun to handle disputes that the adversary system is not designed to handle (p. 96). A primary difference between the adversary system and the problem-solving system is that the latter requires the judge and attorneys to view themselves as problem solvers, not just “case processors,” although the book does not define or describe in depth the term “case processor” (p. 113).

Standard triage questions are suggested to ascertain whether cases should be assigned to the problem-solving track:

The authors suggest that experts and academicians develop triage questions based on the foregoing criteria. While a lofty ideal, it is unlikely that any such questions would actually be developed without some incentive, making the authors’ suggestions less useful in practice.

Chapter 8 addresses the implications of problem-solving courts (pp. 127-142), offering as a contrast the medical and legal models of problem solving. In the problem-solving model, treatment is individualized. In the medical and legal model, common cases are treated the same, regardless of individual idiosyncrasies. The authors, therefore, correctly note that it would be “unwise to try to graft problem-solving principles onto adversary-based court proceedings, at least until the judgment is made” (p. 127).

Because the authors opine that courts cannot be both adversarial and reconciling, they suggest that criminal defendants be placed on, or switched to, the adversarial track once it is determined that treatment will not work or is neither sought nor desired by the offender. Conversely, the authors suggest that offenders be placed on a treatment track when it is clear that treating an underlying issue will reduce the probability of recidivism (pp. 139-40). I note, however, that these notions are not mutually exclusive. As such, it may be difficult in practice to make clean switches between tracks.

To bolster their theory that a triage approach would benefit courts, the authors offer examples of successful implementation — case-triage strategies in action, they call them — in chapter 9 (pp. 144-152). In particular, Flango and Clarke point out that some courts have limited jurisdiction, making courts more specialized. Courts in New York, as well as Maricopa County, Arizona, also have sought to increase litigant choice, allowing parents in family court to “access the expertise of a multidisciplinary team in law, social services, and life in a confidential setting” (p. 144). Courts in New York, Oregon, Utah, and Minnesota are mentioned for their focus on streamlining processes. The authors also suggest that, to optimize scarce resources, the problem-solving approach in the criminal context should only be used for the sentencing phase (p. 147).

The book concludes its discussion on case triage by acknowledging the implications for judicial selection, court-staff selection, education, and training. The authors recommend that the judicial-selection process be amended to consider “the different requirements of different judicial positions,” stating that candidates seeking to serve on specialized courts, for example, should not seek appointments to courts with more general jurisdiction in hopes of eventually being (re)assigned to a particular docket. The authors also suggest judicial training and education, arguing that training separate from law school is necessary to effectuate change and prepare problem-solving judges. The authors contend that court staff will also need re-training, because the roles they will fill in the problem-solving context will change (pp. 148-51).

In its final chapter, the authors discuss implementing their vision of a modern court. They discuss transparency of the legal market, “unbundling” of legal services, and the diversification of legal-service providers (i.e., courts). The authors then provide a few brief suggestions for reform, including: (1) helping potential litigants understand when court services are appropriate; (2) partnering with other legal service providers to offer potential litigants services; (3) tailoring legal services appropriately and explicitly for litigants; and (4) innovating continuously to offer valuable legal services (pp. 157-59). Flango and Clarke also acknowledge the difficulties and barriers to implementing their vision, including traditionalism, fiscal concerns, and the unique concerns of the criminal- justice system.

All in all, Flango and Clarke present a thought-provoking compilation of ideas for court reform. Beyond the constraints that the authors detail in chapter 10, however, I find some of the book’s suggestions to be idealistic and somewhat unrealistic, at least in the near future. It remains to be seen whether the authors’ reimagined courts of tomorrow can emerge from the crowded courts and inundated judges of today.

1 Indeed, both Flango and Clarke have or have had tenures at the National Center for State Courts, with Flango recently retiring as Executive Director for Program Resource Development and Clarke currently serving as Vice President for Research and Technology. 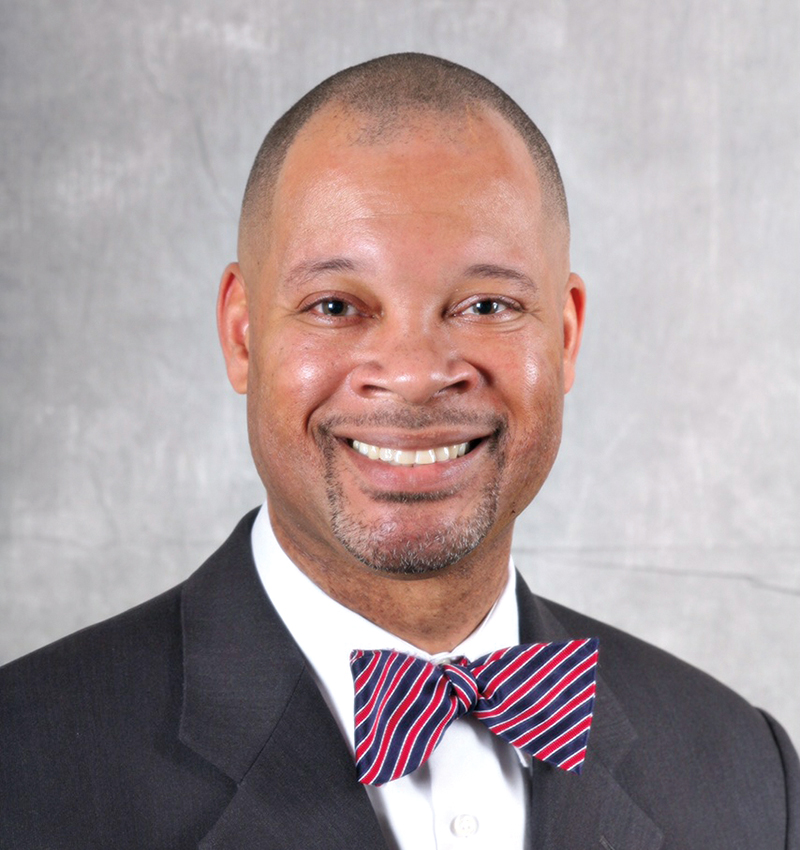 Aaron D. Ford is a partner in the Las Vegas office of Snell & Wilmer where he concentrates on complex commercial litigation, alternative dispute resolution, and products liability. He also serves as the Nevada State Senate Minority Leader.