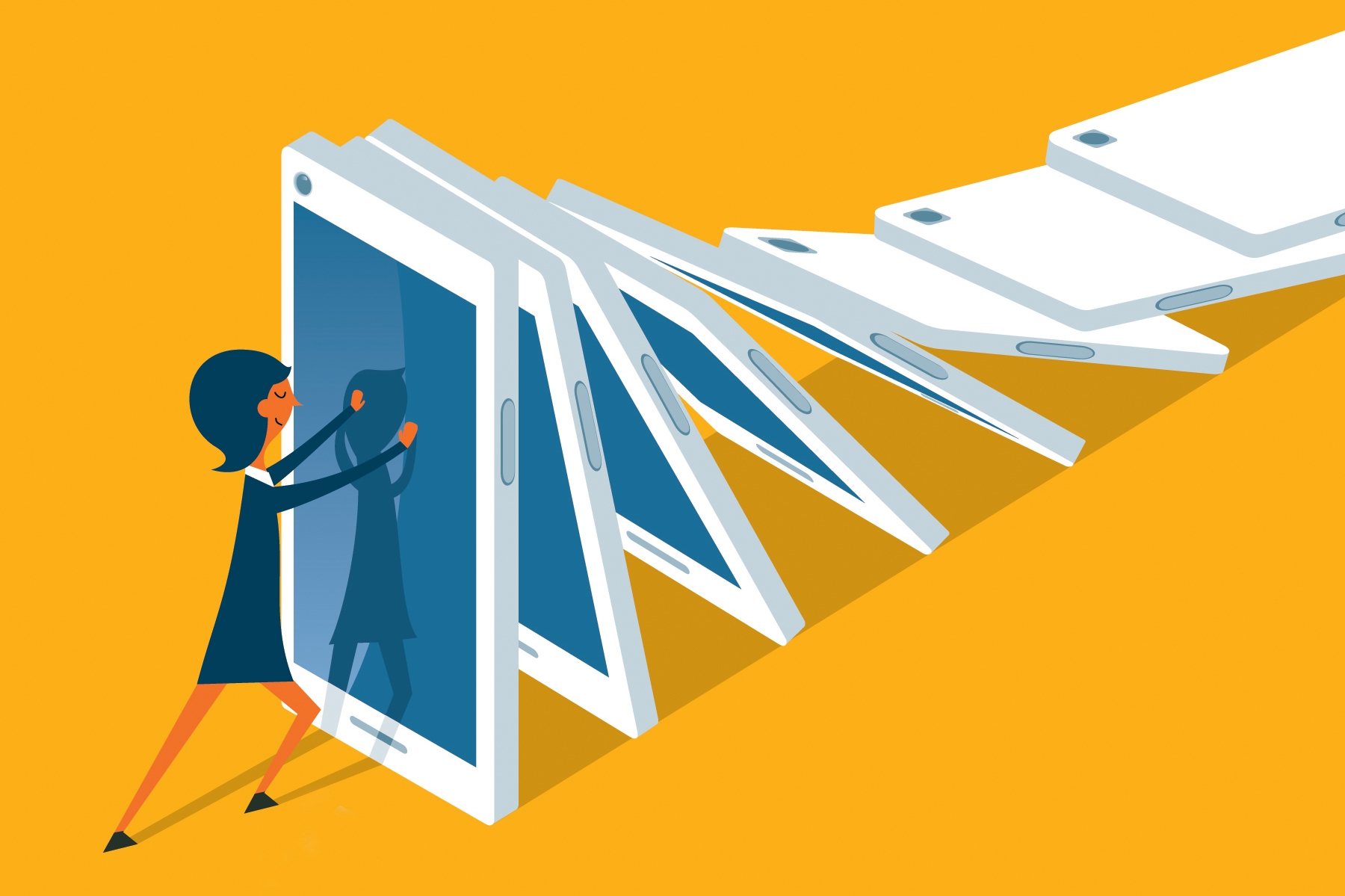 A resolution adopted by the Conference of Chief Justices and Conference of State Court Administrators in August 2018 (Resolution 7) encourages courts to carefully review and assess their policies for cell phone use in courthouses in order to appropriately balance security risks and the needs of litigants, especially those who are self-represented. Several states, notably Virginia, have already moved to develop statewide policies or model policies that address these needs.

But it has proven quite challenging to develop policies to govern the use of devices that seem to grow more complex and multifunctional by the day. “Many of these devices are in fact minicomputers that also happen to have the capacity to be used as a telephone,” Chief Justice John Roberts noted in his majority opinion in Riley v. California in 2014. “They could just as easily be called cameras, video players, Rolodexes, calendars, tape recorders, libraries, diaries, albums, televisions, maps, or newspapers.”

Indeed, as courts consider policies for the use of such complex mobile devices in courtrooms, they face a wide range of challenges — from clearly defining the devices that are to be regulated to who should or should not have access to mobile phones in the courtroom.

What is a cell phone?

Before creating a cell phone policy, courts must first grapple with the question of what is and is not being banned. Many such rules, reflecting their age, continue to refer to “personal digital assistants” (Local Rules of St. Joseph County [Indiana] Courts, Rule 102.4.4) and “pagers” (Courtroom Rules, Dahlonega Municipal Court, Georgia). Others are specifically limited to “cell phones” or perhaps “cell phones with cameras” (Cell Phone Policy, Superior Court of California, County of San Bernardino). But newer policies are classifying cell phones within a broader set of “electronic devices” or “electronic communication devices” (Courtroom Etiquette, 8th District Court, Kalamazoo, Michigan), reflecting the reality that cell phones are capable of doing almost anything a laptop or desktop computer can do, and vice versa. And as we continue to move toward a new reality of the “Internet of Things” — or a world in which everyday objects are connected by the Internet — it’s clear our mobile phones will only become more and more robust in capability and likely more difficult to regulate.

Because cell phones are so intrinsically multifunctional, the ways in which they can impact court proceedings are equally varied and complex. From a security and procedural standpoint, concerns include photographing and recording proceedings, jurors, and witnesses. Such recordings are already usually a violation of an existing court rule or, in some states, a statute. Some states place this as a prohibition on individuals; Arizona, for example, prohibits the use of a recording device by a person during a proceeding without first requesting permission from the court (Rules of the Supreme Court of Arizona, Rule 122, “Use of Recording Devices in a Courtroom”). Other states, such as Louisiana, place the burden on judges to ensure that no such recordings take place without the consent of the party or witness being recorded (Louisiana Canons of Judicial Conduct, 3(A)(9)). Most courts prohibit the recording of court proceedings unless, at the very least, notice has been provided to the court. Additionally, there are concerns that a cell phone could conceal a weapon, such as a blade, or that a firearm might be designed to look like a cell phone. And of course, cell phones and other devices can be very disruptive to proceedings when they are not turned off or set to a silent mode.

Courthouses are often multiuse buildings, typically neither owned nor operated by the judiciary. A court-set policy regarding cell phones must mesh with both local and state laws and policies generated by the other two branches (the executive branch, such as law enforcement officials, and the legislative branch, such as state or county legislators) that may place limits on how cell phones may be possessed or used in courtrooms. Several state legislatures, for example, have banned the taking of photographs of jurors or courtroom proceedings in general (Va. Code § 19.2-266, for example, grants the court sole discretion to permit photographs and broadcasting during criminal proceedings). Therefore, all three branches, at both the state and local levels, may be involved in or affected by cell phone policies in courts, while sheriffs or local law enforcement are usually responsible for enforcing whatever policies are in place.

When courts set a cell phone policy, the results tend to vary in terms of scope. A few states, such as Maryland, have adopted a single statewide policy via court rule (Maryland Court Rule 16-111). For the most part, however, these policies are set at the county or municipal level with, at best, a statewide model policy available. Cook County, Illinois, for example, has a “Cell Phone and Electronic Communication Device Ban” that applies to only one court building out of the dozen or so courthouses in the county. Even within the same county, individual court facilities may have different rules. Bans and rules can also vary within the same building; one judge may place a prohibition on the carrying of cell phones into her courtroom while the judge across the hall may set a policy allowing for such devices so long as they are turned off.

As with any rule, cell phone policies often have built-in exemptions. The most common exemption is extended to attorneys; for example, members of the public may be prohibited from carrying a cell phone into the courtroom, but an officer of the court may be allowed to keep the device so long as it is set to silent mode. Exemptions in the Cook County, Illinois ban, for example, included social workers and other court-related professionals.

These exemptions can create tension between the rights of the self-represented litigants and the needs of the court in two ways. First, some argue that the courtesies extended to attorneys when they appear in court on behalf of a client also must be extended to those who represent themselves. Second, self-represented litigants who are not as familiar with the intricacies of submission of evidence may rely on a cell phone in court to show or demonstrate emails, text messages, photos, and the like. Prohibiting a pro se from having a cell phone in court could inhibit that person’s ability to represent herself.

What should people do with their phones?

Even the most publicized and well-documented cell phone prohibition must confront a practical dilemma: What happens to the person who comes to court with a phone in contravention of the rules? A court newcomer may be unaware of the cell phone policy until she reaches the courtroom door, and someone else may know the rules but still need access to his cell phone after his court appearance has concluded. Court staff commonly find several cell phones among trees or bushes near courthouse doors, left there by those who needed to enter the building and had nowhere else to put their phones. Providing cell phone lockers, either as a direct service or via a vendor-maintained locker system, would help alleviate this issue, and allow for more nuance and gradation in the rules themselves — such as distinctions between in-courtroom and out-of-courtroom usage.

While the future of technology is uncertain, one thing is sure: As our “phones” become ever more useful, courts will face continued challenges in regulating and policing their use.

May We Suggest: Shooting From the Hip: Concealed Cameras in the United States Supreme Court