I Recommend: Theodore Roosevelt for the Defense 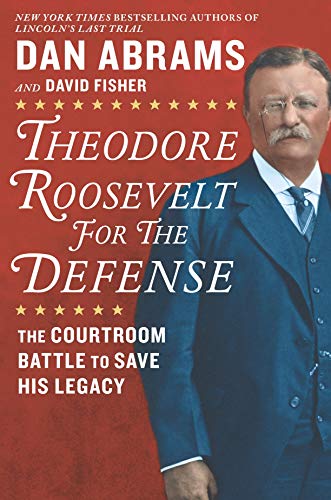 Ask any American today what the trial of the century was, and you will likely get varying answers, ranging from OJ Simpson to Paul Manafort. However, ask any New York student of history and you will likely hear Teddy Roosevelt. In Dan Abrams’ book Theodore Roosevelt for the Defense, the former president fights for his political and legal life after he is sued for libel by a New York party boss. Teddy Roosevelt, known for his frankness, delivered a rousing speech condemning corruption and the political party machine. One of his intended targets was party boss William Barnes. Barnes takes Roosevelt to court for $50,000 for the insults, and Roosevelt has to do one thing to win his case: prove his statement true.

Abrams uses the entire court transcript as well as newspaper clippings from the trial to bring the story to life. Just like a well-choreographed play, each character is introduced and their personalities leap from the pages. It’s not long before the reader believes that they are sitting in the back of that packed courtroom trying to hear every word that emanates from the witness stand. The cast of characters and their larger than life personalities are only eclipsed by the realization that this is no fiction, and these are no scripts.

As a trained attorney, Abrams has the unique ability to take a six-week trial that had over 100 witnesses and transform it into a captivating and page-turning volume that many authors might not muster. This book brings the reader to another time and places them amongst some the greatest characters a courtroom has ever seen.

Theodore Roosevelt for the Defense: The Courtroom Battle to Save His Legacy
Book by: Dan Abrams & David Fisher
Published by: Hanover Square Press (2019)
Available on Amazon and Kindle