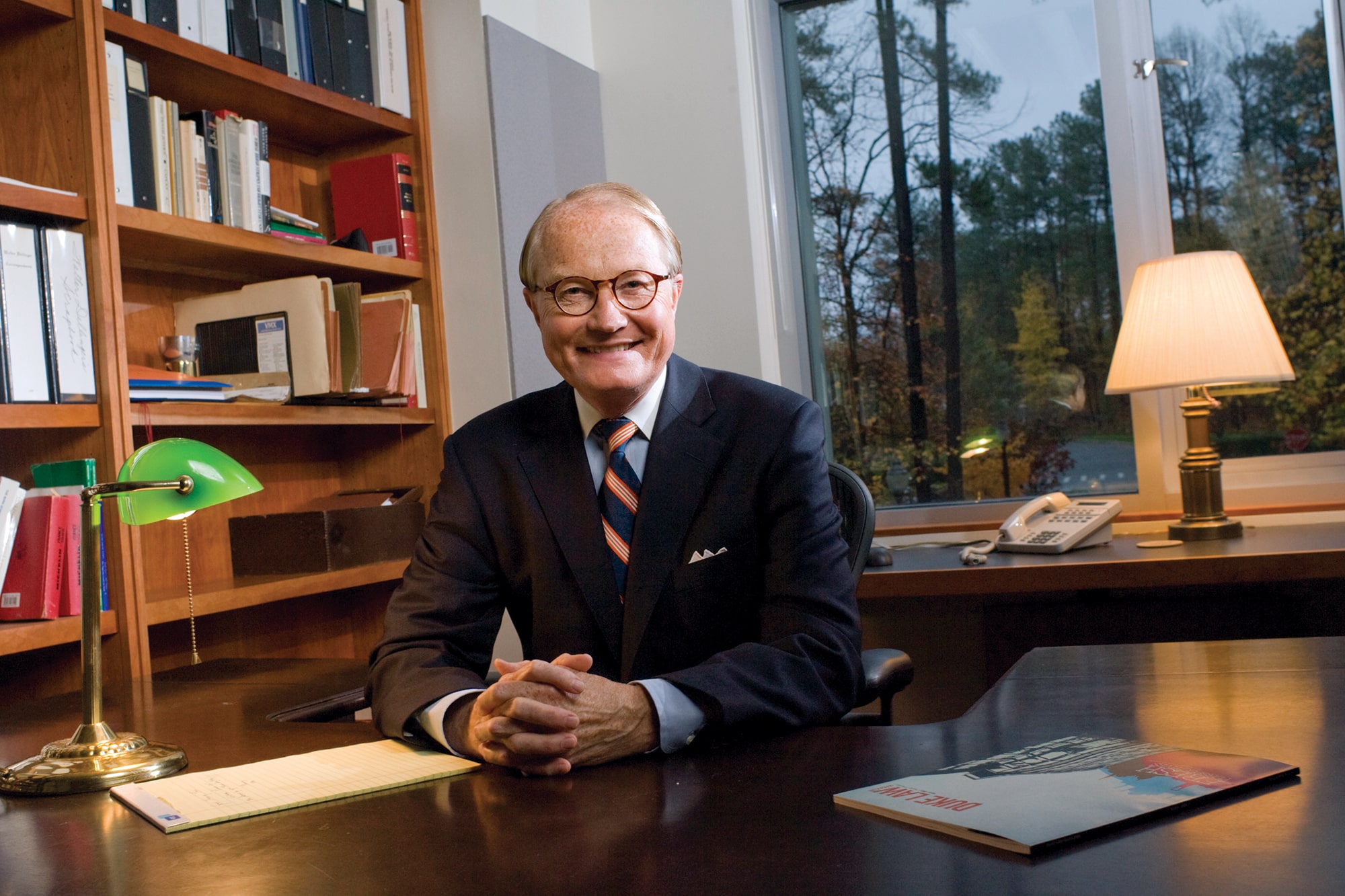 Duke Law Professor Francis E. McGovern, renowned for his expertise in alternative dispute resolution (ADR) and his innovative work as a special master and mediator overseeing or advising on the management and settlement of mass-tort claims, died unexpectedly at his California home Feb. 14. He was 74.

“I have admired and enjoyed knowing Francis for many years, long before I came to Duke,” said David F. Levi, director of the Bolch Judicial Institute and former dean of Duke Law. “He was one of a kind — brilliant, dedicated, kind, energetic, and with a great sense of humor. As a lawyer and teacher, he was focused on moving the field forward, solving seemingly intractable problems, making things better without the friction and expense of traditional litigation.”

A member of the Duke Law faculty since 1997, McGovern combined teaching with the practice of ADR and work as a court-appointed special master in almost 100 cases, including those arising from DDT toxic exposure in Alabama, asbestos contamination, the Dalkon Shield intrauterine contraceptive device, silicone breast implants, Rhode Island’s Station Nightclub fire, and the BP-Deepwater Horizon oil spill in the Gulf of Mexico. At the time of his death, he was serving as one of three special masters assisting with the thousands of federal lawsuits filed by cities and states against opioid manufacturers and others.

McGovern taught courses in ADR, mass torts, and legal strategy at Duke and as a visiting professor at other universities. With Chief Judge Lee Rosenthal of the U.S. District Court for the Southern District of Texas, he also taught a seminar for judges pursuing Duke’s Master of Judicial Studies degree, examining how judicial institutions and individual jurists approach particularly complex and interesting problems.

She called her friend “perhaps the most contradictory person” she had ever met: “Francis was an unabashed devotee of the finest things in life. Clothes — designer only, and only a few designers. Yes, he told me what to wear. Places and spaces — the best, and only the best. Traditions — riding to hounds, in full habit, joining the most selective clubs. But he was an unabashed fan of people. He knew the folks who regularly drove him from Duke to the airport, and back. He knew not just their names, but the ages of their kids and what they did. He knew the people who checked him into his usual hotels. He cared about them. He cared about us. He was the most democratic snob I’ve ever met.”

A native of Charlottesville, Va., McGovern received his B.A. at Yale University in 1967 before serving for three years in the U.S. Marine Corps, where he achieved the rank of captain. He received his J.D. at the University of Virginia in 1973 and practiced law at Vinson & Elkins in Houston. He began his academic career at Samford University’s Cumberland School of Law in Birmingham, Ala., in 1977; he joined Duke after serving as the Francis H. Hare Professor of Torts at the University of Alabama School of Law.

“I decided very early in my academic career that my highest and best use was to combine teaching with the application of that teaching in the real world, what we typically call translational learning,” McGovern told Duke Law Magazine in 2018. “My focus has been to understand the theories and the principles, but then be able to apply them. And I found the reverse works as well: What you learned in the application gives you an opportunity to develop theories and principles.” That approach led him, after working on several mass-tort cases, to develop the concepts of “maturity” and “elasticity” in mass-tort litigation, two concepts now seminal in the field.

In the late 1970s and early 1980s, McGovern was among the first in the nation to write about and to use ADR techniques to avoid or improve the litigation process. “Francis McGovern was a founding father of the modern ADR movement,” said Kenneth Feinberg, another ADR luminary who served as special master of the 9/11 Victim Compensation Fund. “Long before it was fashionable, well before ADR was a permanent fixture in law school education, he predicted that mediation, arbitration, administrative claims programs like the 9/11 Victim Compensation Fund and BP oil spill fund, and other forms of alternative dispute resolution would become mainstream pillars of our American legal system. He wore many hats simultaneously — active mediator and arbitrator, designer, and administrator of mass-claims programs, an academic of the first rank, and a credible bridge between federal and state judiciaries and the legal profession — he paved the way with a blueprint as to how our civil justice system could accommodate and be more responsive to the individual citizen seeking efficient and cost-effective justice.”

As special master in the massive multidistrict federal opioid litigation consolidated before Judge Dan Aaron Polster of the U.S. District Court for the Northern District of Ohio, McGovern also focused on overseeing a settlement track for the case, crisscrossing the country almost continually for the past two years to meet with lawyers for the defendants and the plaintiffs — 2,500 cities and counties to date, with the possibility of thousands more lawsuits to come — in order to facilitate a framework for negotiation.

“This has never happened in the history of our country, and there is no existing structure available to resolve these cases,” said Polster, referring to the sheer scale of the multidistrict litigation. “I believe one needed to be created and Francis was a principal architect.” A key aspect of the plan would survive any appellate ruling against the negotiation class itself, he added: “Probably the most important aspect of it is the mechanism by which the cities and counties have agreed to allocate any funds produced by settlement or verdict — a fair way based on hard data and metrics.” The mechanism is designed to ensure that sparsely populated areas devastated by the opioid epidemic will be treated as fairly as densely populated ones, he said.

“Francis always was the smartest person in the room, but he never acted that way, which was why he was so effective,” said Polster. “Everyone loved him because he was so polite and gracious and always gave everyone else credit for the ideas that were his. He never got discouraged, even when there was plenty of reason to be, and he could always see 10 steps ahead.” Polster said he will treasure the relationship he forged with McGovern through their close work on the opioid litigation. “My life is much better personally and professionally because Francis agreed to help me.”