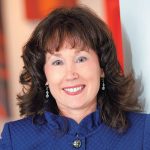 Justice Michelle Keller of the Supreme Court of Kentucky received the Kentucky Bar Association’s Distinguished Judge Award. The award honors a judge who has made outstanding contributions to the legal profession. Justice Keller was appointed to the Kentucky Supreme Court in April 2013. She currently serves as the chair of the Access to Justice Commission and Criminal Rules Committee. Read More»

Senior United States District Judge Thelton Henderson (Northern District of California) is the most recent recipient of the George H.W. Bush Distinguished Alumnus Award from the National College Baseball Hall of Fame. The award honors the accomplishments of college baseball players who achieve greatness off the field. Henderson was a key hitter on the University of California–Berkeley 1954–55 baseball team, playing outfield and third base. He later graduated from Berkeley’s law school and began an esteemed legal career that included becoming the first African American attorney in the civil rights division of the U.S. Department of Justice. Read More»

Andreas Vosskuhle, president of Germany’s Federal Constitutional Court, was awarded the country’s second-highest federal order of merit after leaving his office this year. In 2010, Vosskuhle made history as the youngest president in the history of the Federal Constitutional Court of Germany. Before joining the court, Vosskuhle was a professor at the University of Freiburg. Read More» 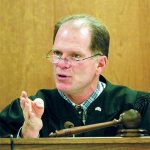 Justice of the Peace Richard Glasson

Tahoe Township Justice of the Peace Richard Glasson received a lifetime achievement award from the Nevada Judges of Limited Jurisdiction Association. Glasson is a past president of the association, which is the largest judicial body in the state and represents all justice and municipal court judges. Glasson is Douglas County’s longest-serving and only judge since taking office in 2001. Read More»

The Network of Bar Leaders of the Southern District of New York honored Judge Denny Chin of the U.S. Court of Appeals for the Second Circuit with the Honorable Harold Baer Jr. Award. Judge Chin was recognized for his leadership, promotion of diversity, and impact in the Asian American community as the first Asian American appointed as a United States district judge outside the Ninth Circuit. Read More»

Indiana Judge Kristen McVey was honored at her local 2020 YWCA’s Salute to Women celebration. After law school, McVey worked for the Tippecanoe and Carroll County, Ind., prosecutor’s offices and was the first woman to hold the position of chief deputy prosecutor of the county. Read More»

Chief Judge Anna Blackburne-Rigsby of the District of Columbia Court of Appeals received the 2020 Margaret Brent Women Lawyers of Achievement Award. The annual award, named for the first female lawyer in North America, honors female trailblazers in the legal profession. Chief Judge Blackburne-Rigsby is a graduate of Duke University and Howard University School of Law, past president of the National Association of Women Judges, and former chair of the International Association of Women Judges’ Board of Managerial Trustees. She currently chairs the Joint Committee on Judicial Administration in the District of Columbia. Read More»

Judge Martha Warner was awarded the Florida Association of Women Lawyers’ Rosemary Barkett Outstanding Achievement Award for 2020. This award is the highest honor given by the association. Warner was the only female lawyer in Martin County when she was first admitted to the bar in 1974. She is now the longest-serving appeals court judge of Florida. Read More» 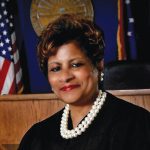 Judge Emily Miskel of Collin County, Texas, was named the recipient of the 2020 William H. Rehnquist Award for Judicial Excellence, the highest honor bestowed to a state court judge by the National Center for State Courts. As court proceedings moved online due to the COVID-19 pandemic earlier this year, Miskel offered trainings for Texas judges to help courts across the state navigate the transition. She held the state’s first fully remote hearing and first fully virtual bench trial in March and has since presented at multiple webinars on remote proceedings, receiving national recognition for her efforts. “In these historically challenging times, a few true leaders have come to the fore. Judge Miskel is at the head and worthy of the award named in honor of Chief Justice William H. Rehnquist,” Texas Chief Justice Nathan Hecht and Texas State Court Administrator David Slayton said in a nomination letter. “We think Chief Justice Rehnquist would be proud, as we are, of Judge Miskel’s outstanding qualities of judicial excellence demonstrated most powerfully over the past three months but also over her legal and judicial career.” Read More» 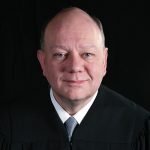 Three judges received distinguished alumni awards from Mercer University School of Law. Georgia Supreme Court Justice Michael P. Boggs received the Meritorious Service Award for service to his alma mater. Boggs also has served as a state representative, superior court judge, and judge for the Court of Appeals of Georgia. Judge Carl C. Brown, Jr. received the Outstanding Alumnus Award for his service to the legal profession. He was the first African American judge in Augusta when he was appointed chief judge of the municipal court in 1982. He is now chief judge of the Superior Court of the Augusta Judicial Circuit and administrative judge for the Tenth Judicial District. Judge Rizza P. O’Connor received the Young Alumni Council Volunteer of the Year Award for her service to Mercer law students. She has served as chief magistrate judge for Toombs County since 2013. Read More»