As an American history buff and avid reader, I am always pleasantly surprised when I discover an American judicial hero whose life’s story enjoys periodic popular revivals. Albion Winegar Tourgée is one such “storied” judge. Not only is his own narrative compelling history, but he gave American literature a wealth of narratives of new American citizens, who were confronting freedom after a long night of slavery.

Today, Tourgée is undergoing a revival of sorts. His life was the subject of a new biography, Color Blind Justice: Albion Tourgée and the Quest for Racial Equality from the Civil War to Plessy v. Ferguson, by Mark Elliot. Duke University Press recently reissued Tourgée’s fictional work, Bricks without Straw, which views the events of reconstruction through the voices of freed slaves. The recently published Undaunted Radical: The Selected Writings and Speeches of Albion Tourgée contains the judge’s most wide-ranging political epistles.

Tourgée was a trial judge between 1868 and 1872 in North Carolina. I like him because he is the archetype of a fearless judge, personifying the rule of law against the lawlessness of post-Civil War North Carolina. His circuit included central North Carolina counties, which were at the time of his judgeship in open rebellion against state authority in the “Kirk-Holden” wars.

Born in rural Ohio in 1838, Tourgée attended Rochester University but left school to enlist when the Civil War broke out. He was severely wounded early in the war. After reading law in Ohio, he moved to North Carolina after the war’s end and after receiving assurances from North Carolina Gov. William Woods Holden that Northerners would be welcomed to settle in the state. Tourgée began a career in Greensboro, N.C., as a lawyer, farmer, and newspaper editor.

In 1868, local Republicans nominated him to serve as superior court judge for the 7th Judicial District. Elected to a six-year term, Tourgée’s experience on the bench illustrates how important it is for a judicial official to be willing to enforce the constitution as written in order to ensure that constitutional rights are enforced equally. Indeed, Tourgée’s personal commitment to the affirmative rights he promoted in the 1868 Constitution was tested in his work as one of the state’s first elected superior court judges between 1868 and 1874. He personally intervened in judicial administration to ensure that newly minted black citizens were included in jury lists and entitled to give testimony as witnesses in court.

Tourgée also took an active role in trying to eliminate Ku Klux Klan violence during what came to be known as the Kirk-Holden rebellion in 1870. To try to limit Klan activities, Gov. Holden imposed martial law and suspended the writ of habeas corpus for Klan leaders in two central North Carolina counties. Tourgée secured indictments against Klan members who were intimidating African-American voters in those counties. These remedial measures, personal and direct, were the means by which these constitutional guarantees were enforced in the 19th century. However, these measures would not become part of the organic law of the state unless judges personally committed themselves to ensure the equal protection of all citizens. Tourgée’s personal experience illustrated both the requirement that elected officials must take seriously the need to uphold the constitution and the principle that an independent judiciary is needed to uphold the rule of law.

In addition, Tourgée personally advocated, despite opposition from the legal community, for simplification of the common-law legal procedure by replacing pre-war practice with a civil code based upon the Field Code in New York. This began with a merger of the courts of law and equity and Tourgée’s appointment to a Civil and Criminal Code Commission, codifying and rewriting both North Carolina’s civil and criminal laws. Tourgée was joined in this effort by two other prominent lawyers, William B. Rodman and Victor C. Barringer. Tourgée’s efforts on the Code Commission lasted until 1871, when the new legislature ended the Commission. By that time the Commission had reformed civil practice in the state. The reforms were designed to make the civil legal code and the courts accessible to the common man. By contrast, the federal courts did not reform their pleading codes until 1937, while North Carolina did not rewrite the Code Commission’s civil procedures until 1967, when it adopted a form of the Federal Rules of Civil Procedure.

Tourgée’s work on the legal structure of North Carolina ended by 1875, when he was a delegate to the convention of 1875 where he fought a largely successful rearguard action to protect the reforms he advocated in 1868. After his service on the bench ended in 1875, Tourgée published legal practice manuals for the bar to help explain the reasoning behind the new code. In addition, he published a digest of decisions as an aid to implementing the code. He was elected as a delegate to the state constitutional convention of 1875, where he successfully fought off attempts to repeal many of the reforms he had championed in 1868.

After 1877, the political will to enforce both state and federal guarantees began to wane in the face of exhaustion from the Civil War and resurgent white supremacy. When his advocacy waned in the courts, he began a literary career to promote his ideas. He became one of the best-selling authors of the period. In 1879, A Fool’s Errand by One of the Fools was published, a roman a clef, describing his experiences as a trial judge in reconstruction North Carolina. It was followed in 1880 by Bricks Without Straw. Both were bestsellers, as Northern readers sought information on what life in the exotic South was like for abolitionists and Republican thinkers. He continued his work thereafter as a provocateur and columnist for Chicago papers, denouncing lynching, segregation and “scientific racism.”

Lastly, in 1896, toward the end of his illustrious career, Tourgée represented Homer Plessy in Plessy v. Ferguson. The story of how he and the New Orleans Citizens Committee sought to engineer the facts of this test case is a remarkable legal tale. True to the ideals he represented throughout his career on the bench, Tourgée argued for color-blind justice against institutionalized segregation. It is a testament to his handiwork and his advocacy that all of the major legal and social reforms he championed remain in the North Carolina constitution today.

To learn more about Albion Tourgée, see Carpetbagger’s Crusade: The Life of Albion Winegar Tourgée, by Otto H. Olsen, or Color Blind Justice: Albion Tourgée and the Quest for Racial Equality from the Civil War to Plessy v. Ferguson, by Mark Elliott. 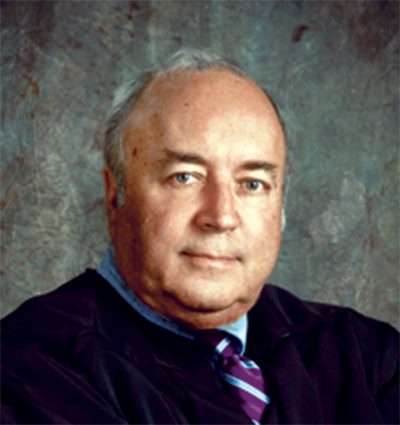 ROBERT N. “BOB” HUNTER, JR., is a judge on the North Carolina Court of Appeals. He previously practiced law for 35 years with the firm of Hunter, Higgins, Miles, Elam and Benjamin, PLLC, as managing partner. He is past president of BarCares, Inc., which delivers programs and counseling services to meet the psychological health needs of the bench and bar, and he is a 2014 graduate of the Duke Law Master of Judicial Studies program.