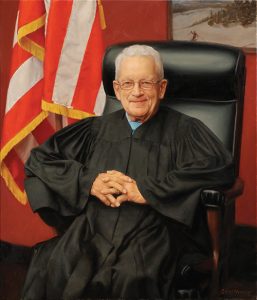 The Eastern District of Pennsylvania is a large, collegial trial court where quick humor and timely touches of humanity are as highly valued as intelligence and integrity. Even though this court is one where these characteristics abound, most of our 32 currently serving district judges would name J. William Ditter, Jr., as first among equals with the qualities that practitioners and the public place high on the list for exemplary judges and human beings.

But there is another reason to shine a light on Bill Ditter. Too often we extol people only after they cannot readily receive our words of appreciation. With the fortuitous opportunity to showcase a deserving judge, I have selected someone who, albeit like so many others, ought to know in real time the very high regard his friends and acolytes have for him and some of the reasons why I, among many, wish I could claim to be his relative as well as friend and colleague.

The basics are impressive. Public service is in Bill’s bones. Bill Ditter is the son of a “country lawyer” turned Congressman who served for a decade until his death in 1943, the year Bill graduated from Ursinus College. Having become a member of the U.S. Naval Reserve in 1942, Bill entered active duty during World War II. He served again in Korea. In between, he earned his law degree from the University of Pennsylvania in 1948. Thereafter, he clerked for the common pleas judges of Pennsylvania’s Montgomery County, where he later became an assistant district attorney and then first assistant D.A. while maintaining a busy private law practice with his lawyer sister through the late 1950s and early 1960s. He served six years as a state court trial judge until his confirmation in October 1970 as a federal judge. He assumed senior status in 1986, and his 42 years of federal bench service continues unabated. Thank goodness it does.

Reminding us by example that service takes many forms, in 1984 Judge Ditter helped incorporate the Historical Society of our Court. From the Society’s inception, Judge Ditter served on its board of directors and as chairman of its important calendar committee, where he has taken special care to call to our collective attention the many interesting communities beyond our district’s population centers. Judge Ditter served for many years on the Villanova School of Law Board of Consultors. Year in and year out, he has delivered guest lectures, received honorary degrees, and been selected for well-deserved public accolades from bar associations, educational institutions, and civic organizations.

Always a devout and humble participant in the work of his church, he has taught Sunday School and been chosen often as a lay homilist for the congregation. He charms as he teaches. Bill has advised: “Three things of certainty I learned from my late father: First, you cannot climb a wall that’s leaning toward you. Second, you cannot kiss a girl who’s leaning away from you. And third, you cannot, with full grace due, accept the praise and honors that are bestowed upon you in life.”

With his beloved wife of more than 60 years, the late Verna B. Ditter, Bill parented four sons who, in turn, have provided Bill with eight grandchildren and several great-grandchildren. They could not ask for a more devoted and lively paterfamilias. His various hobbies have included photography, writing poetry, gardening, genealogy, softball, downhill skiing, and beekeeping. More on that last one a bit later.

Professionally, Bill Ditter loves the trial court — interacting with lawyers and litigants, settling cases, presiding over trials, writing opinions. Those privileged to watch Bill in action see clearly that he believes trial judges have the best job in the world. Certainly, no one does it better, and those of us who try to emulate Bill Ditter are better for it. He is revered by his many law clerks for whom their service with him is a prized badge of singular honor.

In Bill Ditter we have an enormously productive trial judge. Many of his cases were tremendously significant, but Bill always acknowledges that every case is significant to the parties involved. He never describes the cases on his docket so that the listener will be impressed by the judge. Yet his work has been impressive.

Early in his federal career, Judge Ditter masterfully engineered the Reading Railroad bankruptcy. When he sentenced a prominent politician convicted of public corruption, he minced no words: “Lying, cheating, and scheming were a way of life for him . . . . When he was out of office he gave bribes, when he was in office he took bribes . . . .” On the state court, Judge Ditter was similarly to-the-point in denying custody to a mother who had treated her children as inconvenient commodities. And he takes to task lawyers who habitually display insufficient care in their professional work product.

Of course, Judge Ditter has presided over hundreds of other cases, mammoth or minor, all of which have received the talents of a judge who is an exemplar of ability, probity, temperament, and honor. From Bill Ditter I have learned that a judge should work calmly, with integrity, treating every human being in the courtroom — parties, lawyers, victims, offenders — with dignity. Perhaps next to fairness, the most important thing Bill has brought to the job is the respectful and dignified treatment of each person before him.

He is a judge of uncommon courtesy and chivalry off the bench as well. Bill never raises his voice or interrupts; he holds the door for others; always stands and offers to pull out and hold the chair for any woman who chooses the seat next to him (and who wouldn’t so choose?) in the judges’ lunchroom. Bill’s humor is dry, witty, and very funny in a self-deprecating, never hurtful way. Bill’s manner is as far from hubris as can be. The peerless “file clerk” in his memory pulls out a charming joke on any topic and on demand. His Christmas letters are legendary as diaries of family and country life, recounting an endless series of mild misadventures marked by the foibles of human nature, all told with disarming detail.

For most of us, however, the most memorable Ditter letters respond to judicial bureaucratic inquiries. In one, Judge Ditter was reporting as the District’s Liaison Judge to the General Services Administration for 1977, a year in the still-early life of our “new” courthouse. Judge Ditter described it as a year of significant achievement with regard to the struggles attendant to painting the judges’ elevators doors, installing an “artsy” plaza water fountain as a way of handling subterranean water that was causing building subsidence, balancing the building HVAC by averaging (note the distinction from “balancing”) the temperatures in various unrelated parts of the courthouse, and supporting the structure from the top down in deference to the location of Court of Appeals on floors above the District Court chambers. Periodically this letter is reissued on its publication anniversary as a reminder of the timelessness of many joys lurking in judges’ work environments.

The other classic for which Judge Ditter is honored by his appreciative colleagues is his priceless response to a follow-up inquiry from the Chairman of the Committee on Financial Disclosure seeking further explanation of $171.50 in “Farm Income” reported by the Judge on his annual financial report. Specifically, Judge Ditter was required to explain whether one-half hog, a few dozen eggs, and some honey were “grown, manufactured, etc.,” at his place of residence. Judge Ditter adroitly disposed of the ham and eggs and then, zeroing in on the bees, responded:

“The remaining part of the farm income came from the sale of honey. Once again, the bees [like the hog and the chickens] that produced the honey did not live in our actual place of residence. They had their own quarters which we call beehives and while one or two from time to time may have gotten into the house (a problem we did not have with either the hog or the chickens) we did not make them feel welcome and tried to make reasonable efforts to exclude them. Honey comes from nectar. I think that much of the nectar gathered by our bees was found on other persons’ properties although I must admit I have made no real effort to trace it. In my judgment honey does not grow at all nor is it manufactured. Therefore, it must come under the heading ‘etc.’”

The Chairman of the Committee sought no further explanation.1 What better example of a judge’s craft could there be?

Though he rarely speaks of them, some of his colleagues know how deeply felt and indelible certain painful personal experiences have been for Bill. In each instance he has borne, and still bears, them resolutely and without complaint. His sacrifices are not worn as badges. He would shun martyrdom or anything that might call attention to himself or impede his service on the bench or at home. Rather, Bill’s life as a devoted husband, father, judge, friend, and community member serves as daily encouragement to the rest of us to strive to be better as we are glad to greet each day.

Though I was not in attendance, I understood from our late colleague Judge Norma Shapiro (who never got these things wrong) that at the dinner to mark his assumption of senior status, Judge Ditter reported that, on the day of his induction as a Common Pleas Court judge, he and his wife Verna went to a country chapel to conclude the day with a prayer. The judge prayed that God would help make him a good judge and keep him humble. Apparently, Verna quickly assured God it was only necessary to make sure Bill was a good judge, because she’d make sure he stayed humble. That indomitable pairing has had splendid success. Bill Ditter is a man who quietly and effectively demonstrates every day that he understands and obeys the Biblical admonition to do justice, love mercy, and walk humbly with God. I, among many, thank all the powers-that-be for the privilege of learning from our friend, Judge J. William Ditter, Jr. 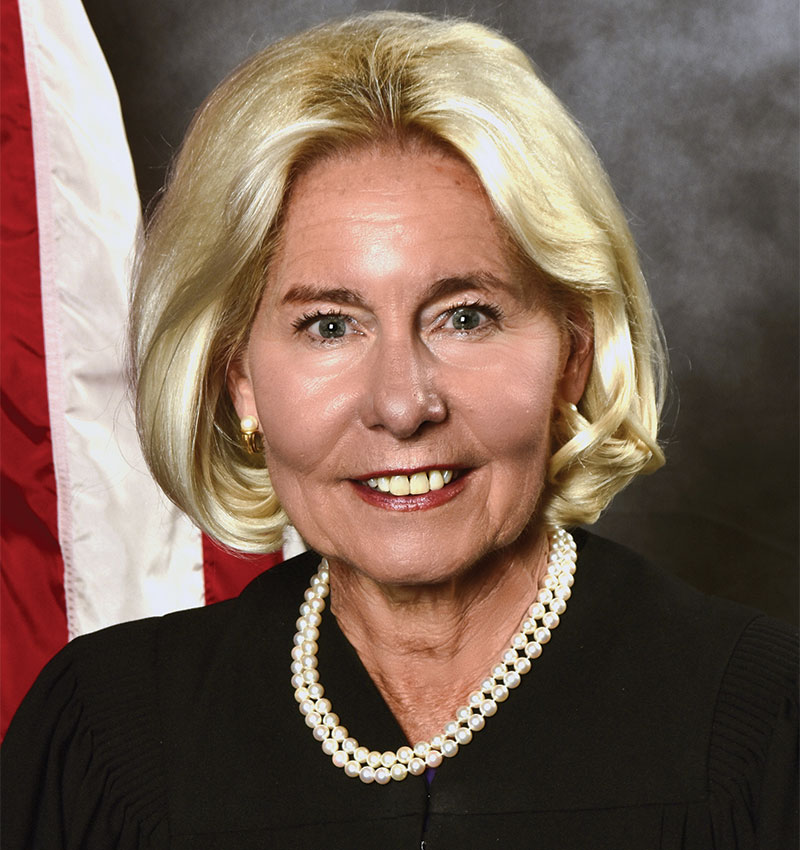