How Lockhart Really Should Have Been Decided: Canons of Construction Are Key

by Bryan A. Garner 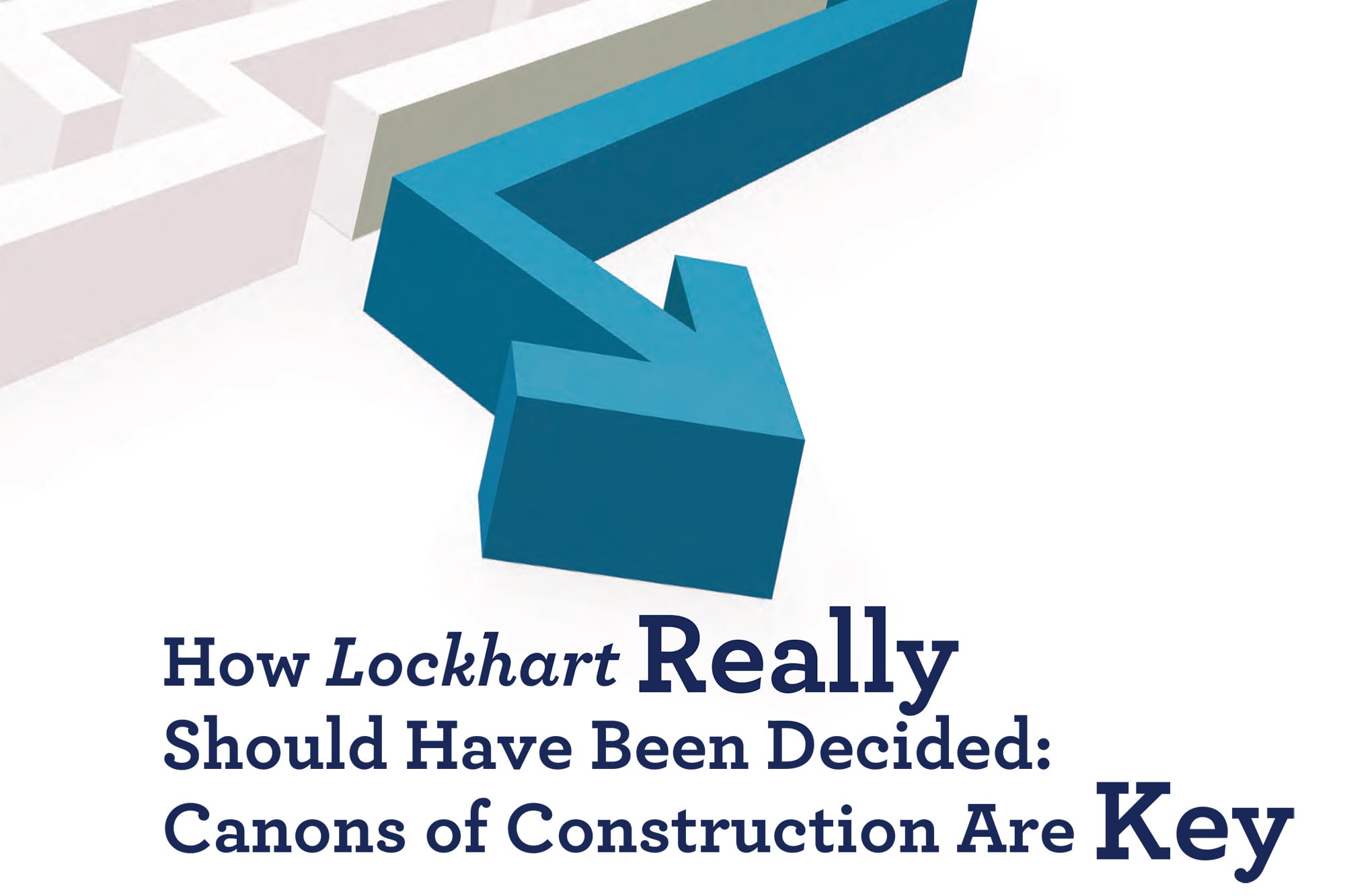 In the winter 2017 issue of this journal, my friend and colleague Professor Joseph Kimble undertook an interesting exercise: rewriting the U.S. Supreme Court’s decision in Lockhart v. United States1 — one of the first decisions handed down after the death of my late coauthor, Justice Antonin Scalia.

Kimble’s dictum-filled opinion runs to well over 3,500 words, with headings such as “The Futility of Canons” and “What Does It Mean to Be Ambiguous?” The opinion is full of speculation (“it may well be that trailing modifiers should be treated as presumptively ambiguous”) and even a bit of semantic nihilism (“anybody could produce multiple variations on a single example to try to swing the debate”). Kimble concludes his analysis by effectively throwing up his hands: “all the tools of interpretation have been exhausted in this case, and we are still left with two reasonable, or plausible, interpretations.” He declares that “the textual canons of construction are no help. We therefore invoke the rule of lenity.”

The rule of lenity, of course, is a canon of construction.

Although I agree with Kimble’s  favored outcome. I dislike the reasoning and the style of opinion-writing. The canons of construction can in fact dispose of the case with admirable concision. That’s what Justice Scalia and I favored. That’s why we wrote Reading Law: The Interpretation of Legal Texts (2012), which has become one of the most frequently cited treatises in the Supreme Court — with five citations in cases decided during the 2016-2017 Term.2

The field of law would benefit if we had shorter judicial opinions bloated with hand-wringing dicta that only obscure the law. My own rewrite of Lockhart, just below, takes only 420 words. It’s some 88 percent shorter than Kimble’s. As a textualist, I’ve relied exclusively on the text — and for argument’s sake, I’ve cited only Reading Law, which collects many cases in support of the canons.

In short, the case could have been decided with much greater clarity by applying the canons as Justice Scalia and I expounded them in Reading Law. A majority opinion like this one would give the lower courts much clearer guidance.

Some years ago, Avondale Lockhart was convicted in New York of sexually abusing his adult girlfriend. Last spring, he was indicted in the Eastern District of New York for child-pornography offenses under 18 U.S.C. § 2252(a) and pleaded guilty to one offense. His mandatory minimum sentence was increased because of the earlier state conviction. The contested language from §  2252(b)(2) increases the penalty if the defendant has had “a prior conviction . . . under the laws of any State relating to aggravated sexual abuse, sexual abuse, or abusive sexual conduct involving a minor or ward” (emphasis added). The trailing modifier — involving a minor or ward — might modify all three nouns in the preceding series (applying the series-qualifier canon3), or it might modify only the last one (applying the last-antecedent canon4). If the former, Lockhart’s prior conviction for sexual abuse of an adult does not trigger § 2252(b)(2), and the court of appeals was wrong to uphold the increased prison sentence; if the latter, § 2252(b)(2) applies regardless of the abuse victim’s age, and the increase in Lockhart’s sentence was appropriate.

Given that the construction at issue involves a “straightforward, parallel construction that involves all nouns . . . in a series,”5 the series-qualifier canon, favoring Lockhart’s reading, is more directly applicable. The last-antecedent canon is less applicable because the construction doesn’t involve a “pronoun, relative pronoun, or demonstrative adjective”6 — in short, no word has a grammatical antecedent. Nor does the nearest-reasonable-referent canon apply because the syntax does not involve “something other than a parallel series of nouns.7

Even if the two principal canons were irreconcilably at loggerheads, the fact that the statute is a criminal one would militate decisively in favor of Lockhart. Under the rule of lenity, which is “underused in modern judicial decision-making,”8 Lockhart’s conviction must be overturned. As our late colleague Scalia J. wrote in Reading Law, “a fair system of laws requires precision in the definition of offenses and punishments.”9 If an ambiguity in a criminal statute is genuinely debatable, the defendant wins.

Because Lockhart’s previous offense did not involve a minor or a ward, §  2252(b)(2) doesn’t apply. Reversed and remanded.