How solitude can make you a better leader 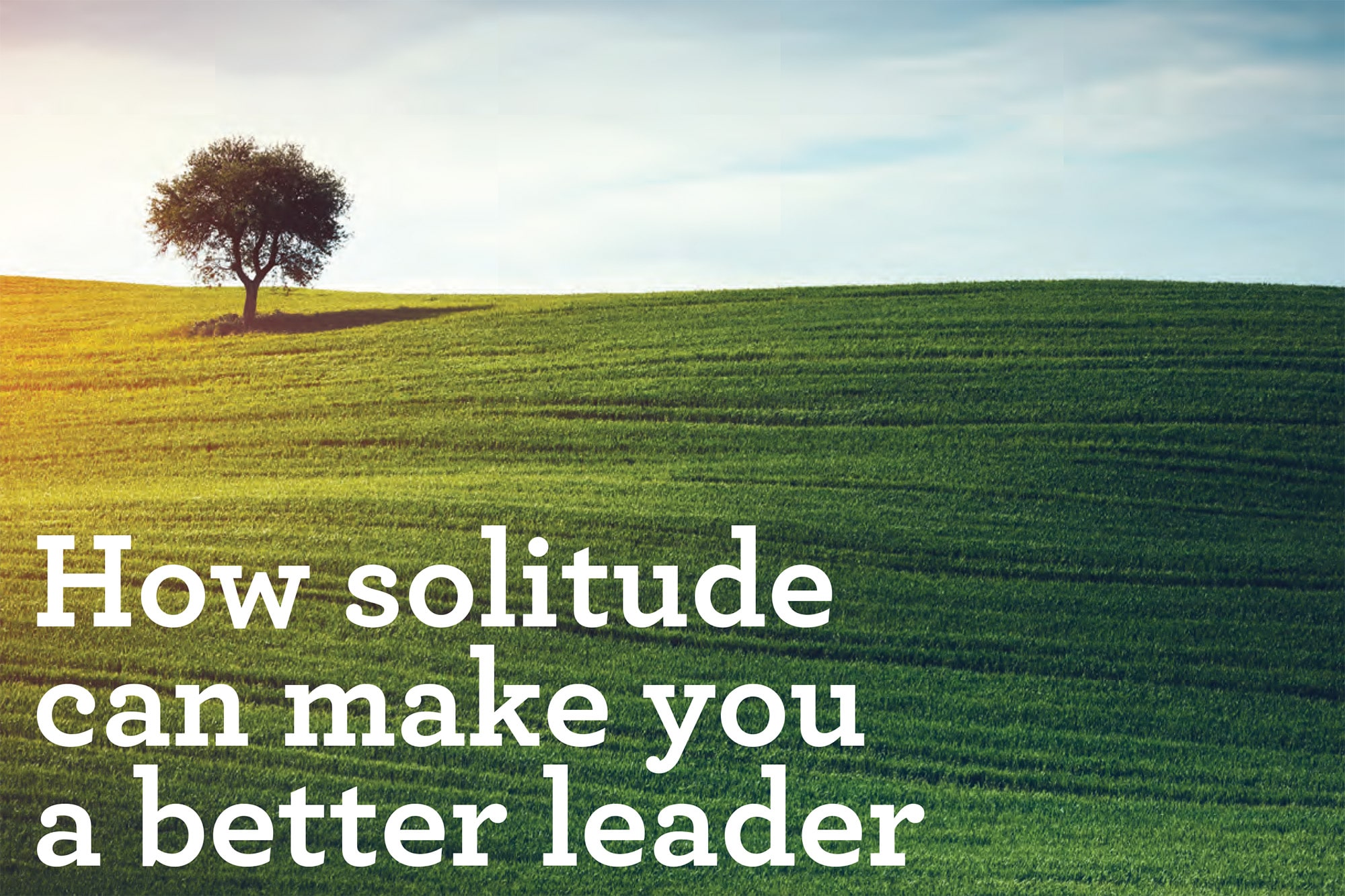 Is solitude something we should seek or avoid? Is it helpful or detrimental to individuals, and specifically those who are leaders? If it is helpful, why is it particularly important to those in leadership positions? Can judges particularly benefit from quiet contemplation?

In their new book, Lead Yourself First, Inspiring Leadership Through Solitude (Bloomsbury 2017), Judge Raymond Kethledge of the U.S. Court of Appeals for the Sixth Circuit and co-author Michael Erwin attempt to answer many of these questions, and the result is a useful and inspirational book on the connection between contemplative soli-tude and effective leadership and how we can make better use of solitude in our own busy lives.

Erwin graduated from West Point and served two tours in Afghanistan and one tour in Iraq. He is the CEO of the Character & Leadership Center, president of the Positivity Project, a major in the U.S. Army Reserve, and an assistant professor in leadership and psychology at West Point.

Their book, though written for a general audience, is of vital interest to the entire judiciary. The basic premise is that in order to lead others, you must be able lead yourself. Further, an important ingredient in leading is having the time to be alone or in solitude to be able to consider a question and make the right decision.

What is solitude? It is not just “the state of being or living alone,” as often defined by the dictionary, but also a “state of being alone without being lonely” that “can lead to self-awareness.” (Psychology Today, published online 7/1/03; Dictionary.com as viewed on 12/6/17.) Henry David Thoreau captured the essence of solitude when he said, “I never found the companion that was so companionable as solitude. We are for the most part more lonely when we go abroad among men than when we stay in our chambers.” (Henry David Thoreau, Walden, 1854.)

In our modern world, we are constantly barraged with information, emails, messages on our smartphones, 24-hour news cycles, and entertainment on every possible technological gadget. Kethledge and Erwin don’t suggest that we totally disengage from the modern world and go to Walden to seek solitude. Rather, they ask us to take intentional steps to find it in our busy lives.

Of course, the concept of solitude is not foreign to judges. Trial judges, whether in state or federal courts, often are asked to make snap decisions without the opportunity for the sort of reflection or contemplation that might help us better analyze the problem and come to the right or best ultimate decision. Many trial judges would look wistfully at the luxury of having time to reflect in solitude, analyze the problem, and come to a result.

The concept of solitude is familiar to, and just as challenging for, appellate judges. Appellate judges often get solitude in abundance. For those who previously served as a trial court judge or in an active trial practice, the change to the relative quiet of the appellate chambers can be overwhelming. To go from constant calls to an occasional phone call, or from hundreds of emails daily to hundreds monthly or even yearly, can be disorienting. Thus, the first thing that the appellate judge needs to do is to learn to embrace the solitude of the job.

Embracing solitude, the authors suggest, is the first step to a thoughtful decision-making process. Solitude allows a person to take stock of his or her actions and determine if they were correct or not in retrospect. It allows the person to “prepare emotionally” for future and past events.

For some, solitude is an uncomfortable and unnatural state. Perhaps extroverts and social beings cannot fathom actually forcing themselves to be alone to just think. No computers. No smartphones. No television. No music. Just you and your thoughts. For many, this may seem more like a threat than a reward. But the book makes a compelling case for solitude and contemplation as the means to mental clarity, moral courage, and effective leadership. As Brené Brown, a professor at the University of Houston and founder of Brave Leaders, Inc., wrote in a review of Lead Yourself First: “Solitude is the birthplace of clarity and perspective. As a leader, I’ve experienced this truth, and as a researcher I’ve seen the power that solitude brings to leaders. The tough part is that it takes real courage and discipline to make solitude a practice. In this important book, Ray Kethledge and Mike Erwin show us how it’s done and the profound difference it can make in our organizations.” Indeed, the book offers several specific recommendations for “how it’s done” that seem very doable:

One story that resonated was that of Gen. Eisenhower, who used solitude to gain the analytical clarity needed to make one of the most important decisions of World War II and, perhaps, of the 20th century. Right after the attack on Pearl Harbor, Eisenhower was ordered to report to a meeting with the then-Army Chief of Staff George C. Marshall. Marshall, after informing Eisenhower of the dire situation in the Pacific, asked Eisenhower what the American forces should do next. Eisenhower asked for “a few hours” to think about a response.

Eisenhower went to a vacant office to think and to prepare a memorandum he later entitled “Steps to Be Taken.” The memorandum — “short, emphatic, and based on reasoning in which I honestly believed” — outlined a concise plan of action to assist key allies in the Pacific. It was the first of many such memoranda that Eisenhower would draft during the war. According to Kethledge and Erwin, these memoranda allowed Eisenhower to reflect on the complex issues of the war effort, design a step-by-step response, and put his thoughts on paper.

Eisenhower’s methodical approach to decision-making was perhaps never more valuable than in the days before the D-Day landing. To students of history, this is a familiar story. Eisenhower needed to give his approval to initiate the largest amphibious invasion ever tried in human history. Conditions had to be perfect: “clear skies for air operations, a full moon for the paratrooper drop behind enemy lines the night before, moderate seas for the ships, and tides low enough to allow the landing craft to run ashore.” Eisenhower knew the window of opportunity for all these conditions to coalesce at once would be brief. If he picked the wrong day or the weather turned, the ramifications would be fatal— and worse, a failed landing could turn the tide of the war for the enemy.

The decision weighed heavily on Eisenhower. To make it, he combined his quiet, reflective custom of drafting memos, picking out the goals and action items that needed to be accomplished and using time alone to analyze and come to a decisive conclusion. After once again pausing to reflect, Eisenhower’s dramatic decision — relayed with a simple and declarative “Okay, let’s go” — changed history.

These stories are tailor-made for judges. We identify with higher core principles such as rule of law and fidelity to our constitution. We regularly grapple with tough questions where there is often no good result among the variables offered. Finally, we align ourselves to a higher purpose, one that we model and share by example with the legal community, the larger community, our courtroom, and our chambers staff.

Of course, since this is a book for a general audience, we extrapolate these conclusions into the work of a trial or appellate judge. Kethledge shares small glimpses of how he uses time alone to draft his opinions by finding the right location to contemplate and analyze the issues, but I would have liked to hear more about how he applies his rules to his life as a judge.

Still, any judge, as well as anyone else who cares about leading or setting a good example, will find inspiration here — both in stories of leadership and in the practical tips for finding and using solitude to enhance your own decision- making, whether in the courtroom, in the office, or in your personal life.

Here’s an easy way to start: Get this book, find a quiet place, read it in solitude, and just think.