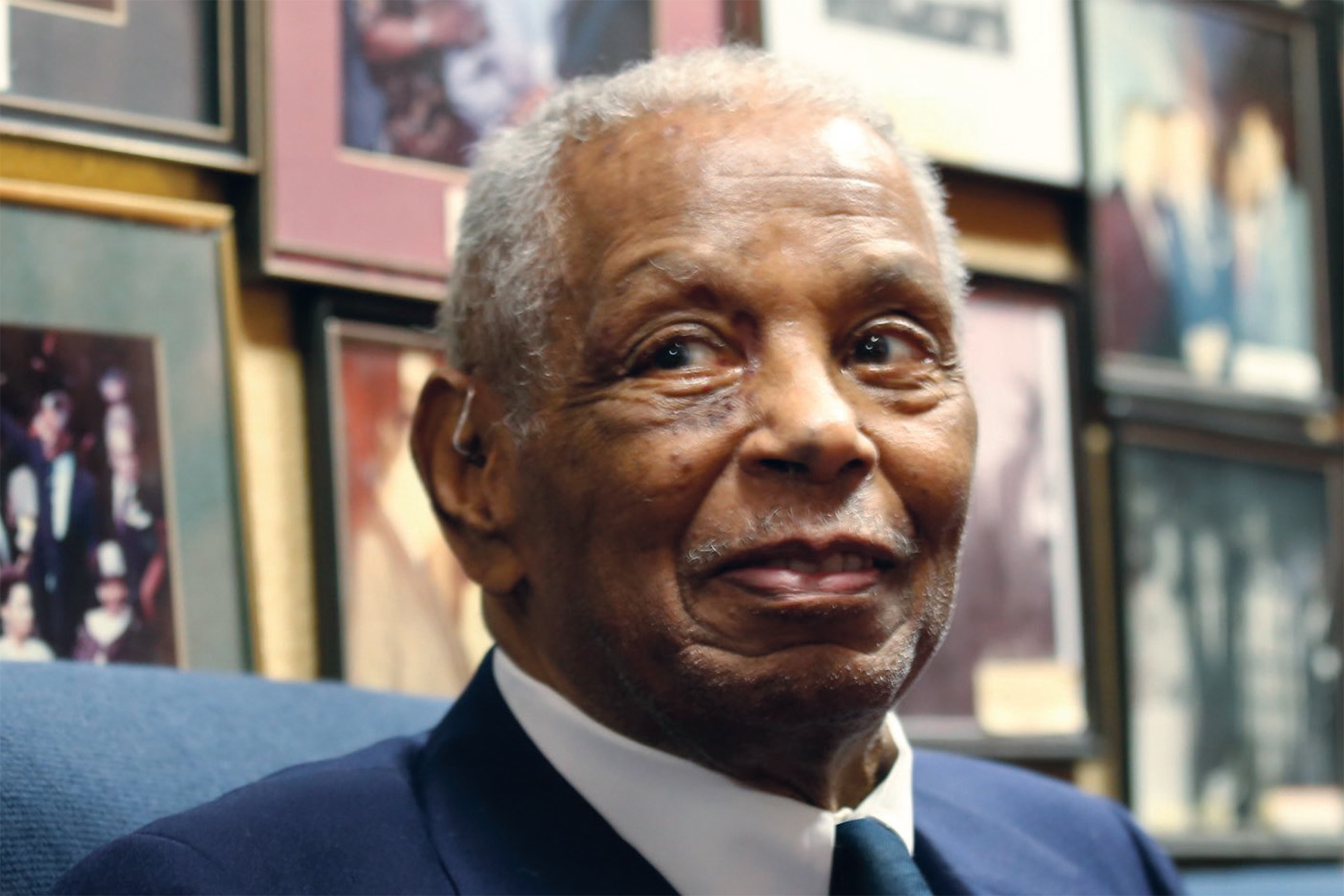 Judge Damon J. Keith is a Senior Judge on the United States Court of Appeals for the Sixth Circuit. Nominated by President Jimmy Carter in 1977, Judge Keith has served on the court for 40 years. Judge Keith’s story, however, did not begin there.

Damon J. Keith was born in Detroit, Mich., as the youngest of six children to Annie and Perry Alexander Keith. He grew up watching his father struggle to support their family by working a factory job with Ford Motor Co. His father, who would sometimes come home with burns and scars on his face from work, did not want his son to experience the same struggles and encouraged Keith to attend and finish college. And Keith did not disappoint! He was the first in his family to attend college.

Keith graduated from West Virginia State College in 1943 and was then drafted into the military. His experiences in the segregated Army bolstered his interest in civil rights. Keith attended the famed Howard Law School, the incubator law school for civil rights giants including the chief strategist behind Brown v. Board of Education. He graduated in 1949 with his J.D. and fierce dedication and passion for justice and equality. Among his professors was the future U.S. Supreme Court Justice Thurgood Marshall.

FROM THE OUTHOUSE TO THE PENTHOUSE

Keith worked his way through law school as a janitor cleaning restrooms in the Detroit News building, grasping at moments during his lunch break to study for the bar exam. One day, while holding a law dictionary in one hand and his sandwich in the other, he was approached by a white reporter. The reporter asked, “What are you reading?” to which Keith replied, “A law dictionary,” and further explained that he was going to be a lawyer. The reporter, openly perplexed at the sight of a young black man professing that he one day would become a lawyer, advised Keith that he had “better keep mopping.” To the benefit of the justice system and civil rights, Keith did not just keep mopping; rather, he became more determined to pursue his dream to become a lawyer — and what a lawyer he became.

Keith did not just become a lawyer, either. In 1964, despite the then-racial climate and ongoing struggles of the black attorney, Keith established his own law practice with four other African American attorneys: Keith, Conyers, Anderson, Brown & Wahls. While working in his successful law firm, Keith became active with the Democratic Party, consistently using his political clout to help his community. He used his skill and prowess through politics to uplift his community socially, politically, and economically. He always had, as a moral imperative, the words of Howard Law School Professor and Dean Charles Hamilton Houston: “A lawyer is either a social engineer or a parasite on society.”

It was in 1967 that Keith received the appointment from President Lyndon B. Johnson to serve as a judge on the United States District Court for the Eastern District of Michigan, where he served from 1967 to 1977. He became the first African American chief judge in that court in 1975.

Keith did not sit quietly during his years on that bench. His passion for civil rights was evident in cases that have proven to be landmark decisions in our nation’s history.

In 1970, Keith heard Davis v. School District of City of Pontiac, where he ordered citywide busing to help integrate Pontiac public schools. This ruling prompted death threats against Keith. In 1971, ten school buses in Pontiac were firebombed by members of the Ku Klux Klan. But Keith could not be deterred: Justice and human rights were at stake.

Just one short year after Davis v. School District of City of Pontiac, Keith presided over Garrett v. City of Hamtramck. The city of Hamtramck, Mich., was demolishing the homes of African Americans under the guise of “urban renewal.” Keith entered a ruling ordering the city of Hamtramck to rebuild the homes it had demolished. Hamtramck appealed; however, Keith’s ruling was upheld.

Arguably, one of Keith’s most notable cases is United States v. Sinclair. In this ruling, Keith told President Richard Nixon and then-Attorney General John Mitchell that the administration could not wiretap the telephones of citizens without obtaining a warrant. This decision became known as “the Keith decision.” Nixon and Mitchell sued Keith personally and pursued the case all the way to the Supreme Court, where ultimately Keith arose as the victor. During his time on the district court, Keith’s dedication to civil rights never wavered.

Most recently, while serving on the United States Court of Appeals for the Sixth Circuit, Keith encountered another case that tested his perseverance, stamina, and dedication to civil rights. Northeast Ohio Coalition for the Homeless v. Husted, 837 F.3d 612 (6th Cir. 2016), was a heated Ohio voting rights case where Keith would serve as a judge on a panel with two of his colleagues. This case challenged voting law changes that the Ohio legislature passed in 2014. These changes imposed stricter requirements on absentee and provisional voters and restricted the assistance that poll workers could provide to voters. A district court judge rejected the changes, finding them to cause an undue burden on voters and to have a disparate impact on black voters. The Sixth Circuit’s majority opinion upheld the district court’s decision rejecting the stricter requirements; however, it further stated that the district court judge erred in rejecting Ohio’s shortening of the time period to fix mistakes on such ballots or present acceptable identification and the state’s new limits on assistance to voters. The majority opinion also reversed the lower court’s findings that the new policies disproportionately impacted minority voters.

Keith, a study and mentee of Justice Thurgood Marshall, dissented. It was not just any dissent. It was a dissent that was shouted from the mountain top and could be heard as it echoed throughout the far reaches of our nation and our nation’s history.

In September 2016, in response to his colleagues’ majority opinion, Keith entered an unheard-of 68-page dissent. It was complete with pictures and summaries of those, young and old, black and white, who sacrificed their lives to the cause of equal protection. Keith opened his dissent by quoting his ruling from Detroit Free Press v. Ashcroft, 303 F.3d 681, 683 (6th Cir. 2002), “Democracies die behind closed doors.” Keith did not stop there. He stated that the ruling took us steps back from the Voting Rights Act of 1965:

Rather than honor the men and women whose murdered lives opened the doors of our democracy and secured our right to vote, the Majority has abandoned this court’s standard of review in order to conceal the votes of the most defenseless behind the dangerous veneers of factual findings lacking support and legal standards lacking precedent. . . . I am deeply saddened and distraught by the court’s deliberate decision to reverse the progress of history. . . . The Majority’s decision to gut the factual findings of the district court and to advance legal standards without precedent in order to shut the most vulnerable out of the political process must be subjected to the natural antiseptic of sunlight. . . . The unfettered right to vote is the bedrock of a free and democratic society — without it, such a society cannot stand. . . . It is the most valuable right a person possesses, because without it, all other rights are meaningless. . . . It is this court’s responsibility to enforce both the Constitution and the statute, and thereby safeguard this precious right to vote. In my opinion, the Majority has failed to do just that. . . . The birth of this Nation was founded upon the radical principle that we, as a people, would govern ourselves. And voting is the ultimate expression of self-government. Instead of making it easier for all persons, unrestrained and unfettered, to exercise this fundamental right to vote, legislators are making it harder. (Northeast Ohio Coalition, 837 F.3d at 638-639, 667.)

DEDICATED TO CAREER AND LOVE

Judge Keith’s dedication and passion for the law and justice was paralleled only by his love for his wife, Rachel. Keith married Rachel Boone, an accomplished woman in her own right, in 1953. Boone was completing her medical residency when they met and she continued to work as a doctor while they raised three daughters. The couple remained married for 53 years until her death in 2007. Judge Keith and Dr. Rachel were inseparable and were a fixture at judicial conferences. His autobiography, Walk With Me, accurately depicts their love and devotion and contains a most beautiful and moving tribute.

As of the publishing of this article, Judge Damon J. Keith is 94 years young and still fervently serving on the bench for the Sixth Circuit Court of Appeals. I know that we have yet to hear the last profound ruling from Judge Keith.

His wisdom and insight continue to inspire us and incite us. It is not only my opinion, but I believe it is the truth that we are a more perfect nation because of the efforts, successes, and confrontations put forth and endured by Judge Damon J. Keith. Through trials, struggles, and determination came this amazing citizen, human, man, lawyer, judge, colleague, mentor, and crusader, someone I am blessed to call a friend and to whom I am indebted and honored to pay this small tribute.