Briefs | From the Publisher, Judging 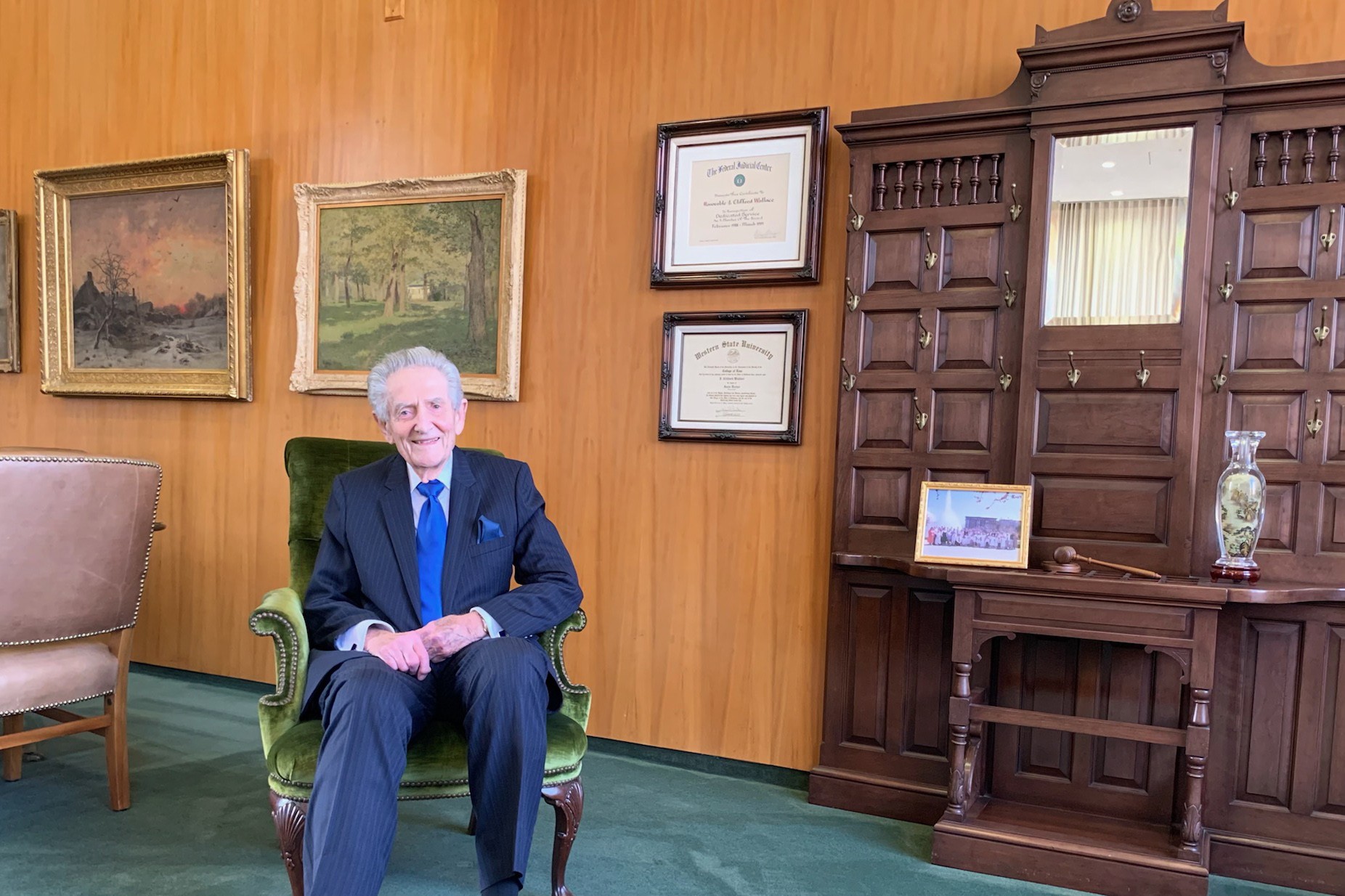 Chief Judge Emeritus J. Clifford Wallace of the U.S. Court of Appeals for the Ninth Circuit has been selected to receive the 2022 Bolch Prize for the Rule of Law. Judge Wallace will be honored during a ceremony in San Diego, Calif., on March 18, 2022.

Through more than 50 years of service to the federal courts, Judge Wallace has led multiple efforts to improve the administration of justice in his circuit and in the federal courts, served his community and church through a wide variety of leadership roles, and advised judiciaries around the world on the development of the rule of law and the administration of justice. Judge Wallace has traveled to more than 70 countries, often at his own expense, to work with judges and governments to strengthen judicial processes, improve court structures, and develop innovative solutions to logistical and legal challenges.

The Susan and Carl Bolch Jr. Prize for the Rule of Law is awarded annually by the Bolch Judicial Institute of Duke Law School to an individual or organization who has demonstrated extraordinary dedication to the rule of law and advancing rule of law principles around the world. By honoring those who do this work, the Bolch Prize draws attention to the ideals of justice and judicial independence and to the constitutional structures and safeguards that undergird a free society.

“Few people have done more to build up and advise judicial systems around the world than Judge Clifford Wallace,” said David F. Levi, director of Duke Law School’s Bolch Judicial Institute. “Judge Wallace’s record of leadership within the federal courts is alone worthy of acclaim. He has led efforts to improve diversity and gender equity, to make the courts more effective and efficient, and to improve communication between the courts and the legislative branch. But his efforts to strengthen the role of judiciaries through teaching, collaboration, and service around the world over his long judicial career are unique. By emphasizing and supporting the proper functioning of courts and the effective and ethical service of judges, Judge Wallace has advanced the rule of law in substantial and remarkable ways.”

“Chief Judge Emeritus Wallace has had an enormous and positive effect on the administration of justice and promotion of the rule of law, both in the United States and throughout the world,” said Chief Judge Sidney R. Thomas of the U.S. Court of Appeals for the Ninth Circuit. “His innovations in judicial administration have had a lasting impact, and the breadth of his accomplishments is simply astonishing.”

A Life of Service

Judge Wallace was born in San Diego in 1928. By his own account, he grew up in a poor home and was a below-average student. A school counselor once tried to dissuade him from pursuing law school based on his lackluster academic performance. But after three years in the U.S. Navy in the 1940s, he was determined to pursue a career in the law. He attended San Diego State College (now San Diego State University), where he earned a degree in economics with a minor in political science. He then earned his law degree from the University of California-Berkeley.

Judge Wallace practiced as a trial lawyer in San Diego before President Richard M. Nixon nominated him to the U.S. District Court for the Southern District of California (in October 1970) and then the U.S. Court of Appeals for the Ninth Circuit (in June 1972). Judge Wallace served as chief judge of the Ninth Circuit from 1991 until 1996 when he took senior status. Now, at age 92, he still hears cases as a senior judge. He was twice widowed and is now married to Dixie Jenee Robison Wallace; together they have 15 children, 50 grandchildren, and 62 great-grandchildren.

Judge Wallace has devoted many years of service to committees, commissions, community organizations, and the Church of Jesus Christ of Latter-day Saints, the church he joined as a teenager. His religious and civic volunteering commitments have often demanded 20 or more hours of work a week — in addition to his full workload as a lawyer and judge.

Throughout his career, Judge Wallace has maintained an abiding interest in finding ways for the courts to work more efficiently. As a summer scholar at the Woodrow Wilson International Center for Scholars in 1976, he studied the basic problems of judicial administration, leading to numerous innovations in the Ninth Circuit and in courts around the country. As chief judge of the nation’s largest federal circuit, he created a long-range strategic plan for his circuit, and he established task forces to study gender and racial bias in the federal courts — efforts soon replicated by other circuits. He has served as chair of the Conference of Chief Circuit Judges, a member of the Judicial Conference of the United States and its executive committee and Committee on International Judicial Relations, a board member of the Federal Judicial Center, and on many other judicial panels and organizations.

At the behest of United States Chief Justice Warren Burger, Judge Wallace led a study on the future of the judiciary in 1982. After exploring his ideas, Chief Justice Burger asked him to establish the American Inns of Court, which are today a staple of the legal profession and involve nearly 30,000 judges, attorneys, and legal scholars. Judge Wallace also worked to help the Judicial Conference create processes for more effective communication with Congress on issues relating to the judiciary.

Judge Wallace said one of his proudest achievements is his effort to develop a case management and court mediation process at the appellate level to help resolve litigation more promptly and more effectively. “There is no ‘rule of law’ until a litigant has a judgment from the highest court that the law allows in his or her appeal,” he said. “These procedures have decreased delay in finalization of litigation. Thus, the rule of law is implemented more quickly.”

Judge Wallace’s interest in finding ways to make courts work more effectively has also motivated his work with judges and courts around the world. He first became involved in international judicial work with a trip to the People’s Republic of China in 1972. For several years afterward, he consulted with judges there to help establish “economic courts” that could facilitate a more reliable legal system to attract international financial investments.

It was the beginning of a lifelong mission to do what he could to support and strengthen the rule of law, whenever and wherever the opportunity arose. He has since helped to establish judicial training centers, advised on case management filing systems and alternative dispute resolution programs, counseled governments on combatting corruption among judges, and organized conferences, seminars, and judicial exchanges in nearly every corner of the world.

The Conference of Chief Justices of Asia and the Pacific, which Judge Wallace organized in 1984, has facilitated a biennial conference of chief justices ever since, fostering exchange and collaboration and leading to the Beijing Statement of Principles of the Independence of the Judiciary, which has been adopted by 32 countries in Asia and the Pacific.

In Africa, Judge Wallace worked to help establish administrative processes to improve court efficiency. In Thailand, where he introduced mediation programs, advised on restructuring Supreme Court procedures, and assisted in developing a judicial training academy, he is known as the “Father of the Courts.” In Guatemala, he helped create a mobile court system to ease access to the courts in remote, rural areas. With Judge John Walker of the U.S. Court of Appeals for the Second Circuit, Judge Wallace developed the Conference of Chief Justices of Central and Eastern Europe. The list goes on.

“Implementing the rule of law should be considered a worldwide project,” said Judge Wallace, adding that he also learns and benefits from the judiciaries he works within all parts of the world. “By taking what we learn and adapting it to local conditions internationally, the prompt implementation of the rule of law becomes a worldwide goal. The rule of law is only a theory until we develop our courts to ensure prompt and fair application. We have not yet devised the perfect judicial system to implement the rule of law, and various countries have different challenges. However, each can do better.”

For more on Judge Wallace, the Bolch Prize, and the 2022 ceremony, see judicialstudies.duke.edu.