The One Who Could: Judge Lawrence J. O’Neill, U.S. District Court for the Eastern District of California 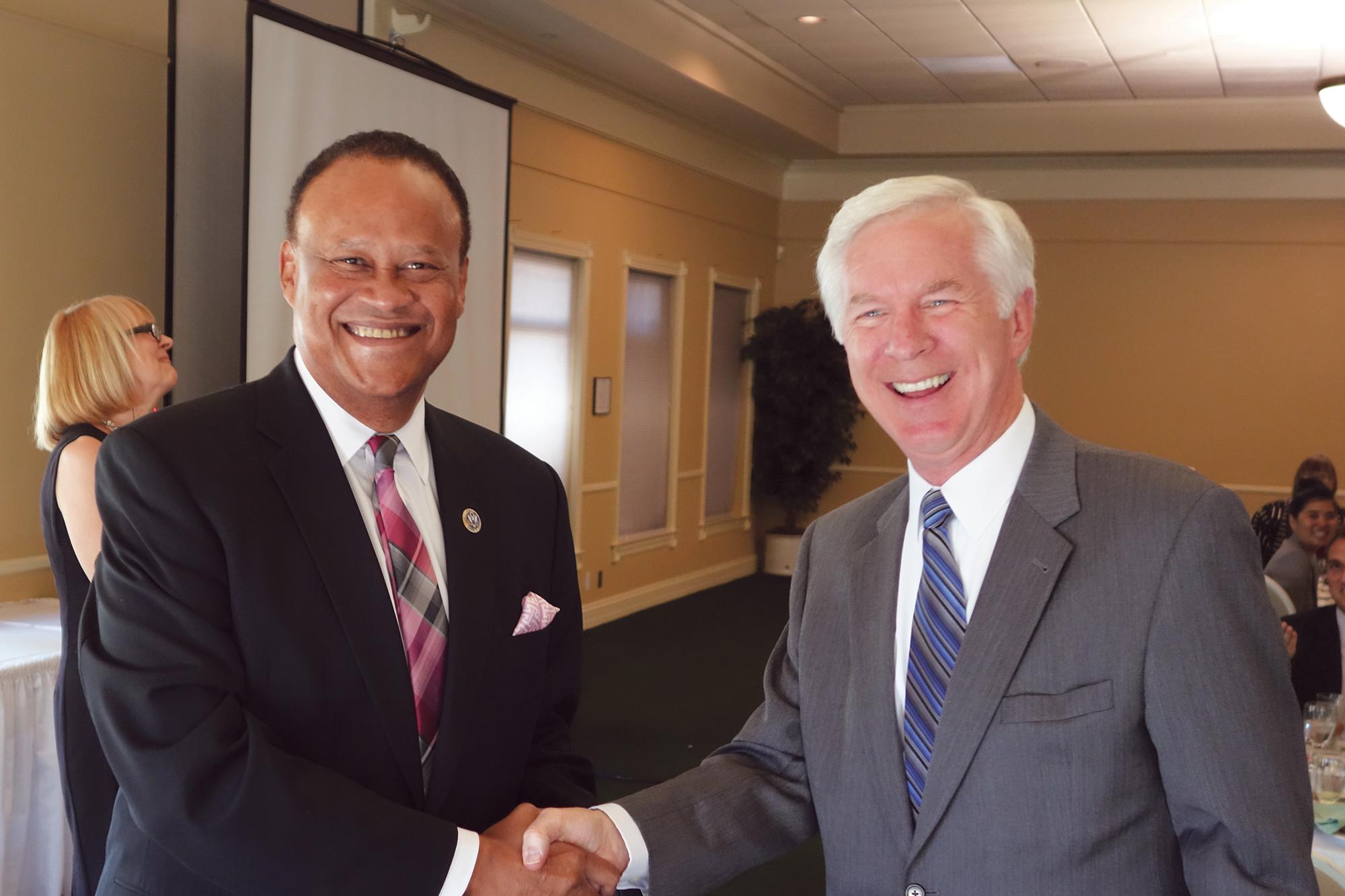 While Lawrence J. O’Neill was completing his 50th jury trial, he received a call from the California Governor’s office telling him he was going to be appointed to the Fresno County Superior Court. The call ended Judge O’Neill’s prestigious partnership in a private firm and returned him to public service, where he had always felt called.

Unlike most judges, who begin their legal careers as lawyers, Judge O’Neill started out as a police officer in San Leandro, Calif. He had already completed a Bachelor of Arts degree in criminology at the University of California at Berkeley. During his three years as a full-time patrol officer, he earned a teaching credential at Berkeley and then completed a Master of Public Administration degree at Golden Gate University. Still dissatisfied with the extent of his formal education, LJO (as he is known to his colleagues and staff) applied to begin work on a doctoral degree in public administration.

Around the same time, a respected colleague urged LJO to take the LSAT. He took the test and did well, and his friend pushed him to apply to law school. Judge O’Neill was ambivalent — he was planning to spend his career as a cop — until the chief of police heard that he had been accepted at the University of California-Hastings College of Law. The chief made LJO a sweet deal: Attend law school for a year, and if it wasn’t for him, he could return to the police force with his rank and seniority intact.

As it turned out, lawyering, rather than policing, was Judge O’Neill’s passion. He flourished in law school. He had planned to become a prosecutor after he graduated, but California’s Proposition 13 passed in 1978, reducing tax revenues and forcing district attorneys to cut, rather than add, jobs. At the time, Judge O’Neill was clerk-ing for Justice Robert Francis Kane of California’s First District Court of Appeal, who wisely advised LJO to go into private practice. LJO joined a firm in Fresno and, in 11 years, tried 50 jury trials to verdict — a feat almost unheard of in today’s legal world. He practiced in a huge variety of areas, gaining exposure to many of the legal topics he would later encounter on the bench.

By 1999 he had handled every type of case that a state court sees. Around that time, he was approached about applying to become a federal magistrate judge in the Eastern District of California. The new challenge appealed to LJO; he applied and was selected. He spent eight years in this judicial role and, though he was appointed as a federal district court judge in 2007, he continues to insist that the job of a magistrate judge is “the best job in the judiciary.” On May 1, 2016, Judge O’Neill became the chief judge for the Eastern District of California.

During his time with the district court, Judge O’Neill saw the caseload grow exponentially while judicial resources lagged far behind the district’s needs. LJO has frequently written to Congress, to the media, and to litigants and attorneys encouraging action to address the court’s dire need for new judgeships. The court has not had a new judgeship in 40 years, despite the population explosion within the district. Although the Judicial Council has recommended for more than a decade that the court receive between five and 11 additional judges, Congress has not acted.

By the time LJO left the court in January 2020, the Sacramento Division of the Eastern District of California had lost Senior District Judge Garland E. Burrell, Jr., to retirement and District Judge Morrison C. England, Jr., to senior status with a concomitant reduction of his caseload by half. Judge O’Neill’s retirement leaves the Fresno Division with only one active Article III judge and one senior Article III judge.

This “crushing caseload” — as litigants and counsel have often heard him refer to the work — has taken its toll. Judge O’Neill and his colleagues have suffered medical ailments, stress, and punishing work schedules to continue to keep up with cases as best they can. And while Judge O’Neill has said he would have continued even in these circumstances, he ultimately decided the sacrifice had become too great for his family. He recently relocated away from the district legal community he has loved for so long, and which has so loved him.

Like other truly great figures, LJO is unaware of the high regard with which others hold him. “Judge O’Neill is the consummate judge in every respect,” said former Chief District Judge Morrison C. England. “He is intelligent, thoughtful, considerate and always follows the law. Judge O’Neill follows the law even when popular sentiment may indicate his decision will not be popular. Judge O’Neill is always extremely thoughtful in all of his decisions and makes sure that his reasoning is clearly explained to all parties in clear and concise language. I am confident that anyone who appears in front of Judge O’Neill knows that they had a full and fair hearing even if the decision was not in their favor. In short, if I had to ever appear before a judge, I would hope that it would be before Judge O’Neill.”

Other colleagues noted that Judge O’Neill is always willing to help, regardless of what he may be facing in his own court proceedings, and is always the perfect professional. One colleague reported with awe her observations from attending LJO’s court for training purposes. On that day, Judge O’Neill was suffering from a recent hand surgery. Though his hand was visibly swollen and he was not taking pain medications, she reported that he conducted four hours of sentencings without a break, without making a single mistake, and without stumbling over a single word.

One recent graduate of Reentry Court — a specialty court addressing needs of federal probationers who are at moderate or high risk of recidivism — wrote a letter to explain that Judge O’Neill was the key to turning her life around. Though Judge O’Neill would have been justified in handing down a stiff prison sentence, he granted her request for probation. He accepted her promise to do better than she had in the past. The graduate wrote, “[Judge O’Neill] told me there were two types of people; those who want to do things and those who can. Which one are you? I thought about it and I said, ‘I’m one who could,’ and he said he would never set me up for failure if he doubted I could. From that day a whole sense of gratitude and a determination to keep my word to a man who saved my life came about.”

Indeed, this former drug addict and felon did fulfill her promise to Judge O’Neill. She obtained sobriety and completed a course of study at California State University-Bakersfield to become a drug and alcohol counselor. She re-established a relationship with her son, whom she had lost to foster care due to her decades-long criminal history. She has now been employed for nearly two years and is working steadily on completing her clinical hours to become a licensed substance abuse counselor. When told that this woman credited Judge O’Neill with saving her life, the judge — predictably — focused on her efforts. “I extended the hand, but she did all of the climbing,” he said. “I’m thrilled for her.”

To all who know him, Judge O’Neill is a straight shooter. One never has to wonder where he or she stands with LJO. Though never harsh with his words, he is direct and says what needs to be said. District judges, especially those in ultra-busy courts like the Eastern District of California, have little time to spend with litigants. The judges must move the cases efficiently through the system, much like a physician with a waiting room full of patients. However, Judge O’Neill takes great care to slow the process in order to hear the defendants and to explain to victims that they are not at fault. One rewarding part of the job, according to Judge O’Neill, is “moving people in distress from a negative point in their lives to something more positive.”

When asked about some of his most memorable cases, he recalled the first trial he conducted as a judge — a remarkable case in which, after having his first order upheld by the California Supreme Court, Judge O’Neill reversed himself and, once again, the high court affirmed.

In this juvenile case, a first-grade teacher noted that one of her students displayed symptoms of club foot. The teacher contacted the child’s parents, whose cultural beliefs indicated that this malady was visited on the child due to a misdeed by an ancestor. If the condition was treated, the ancestor would not be forgiven because proper atonement would not have occurred. The parents chose to allow their child to suffer the correctable condition, despite the long-term devastating impacts it would likely have on him. This caused the matter to be referred to Child Protective Services, and the case came before Judge O’Neill.

After hearing extensive testimony, including from a pediatric orthopedic surgeon at a renowned children’s hospital, Judge O’Neill ordered the child to undergo the surgery to correct the condition, despite the parents’ wishes. The parents filed a writ to the California Supreme Court, which affirmed Judge O’Neill’s order. Within 10 days, Judge O’Neill received a call from the pediatric orthopedist. Fearing that something had happened to the child during surgery, Judge O’Neill took the call with trepidation. Though the news was bad, it was for a reason different than what Judge O’Neill feared. The doctor reported that he had not conducted the surgery and, despite his opinion that the surgery was necessary, he refused to perform it. The doctor felt he was responding to his patient’s own wishes — over the intervening ten days, the child had become convinced that if he had surgery, he would die.

Judge O’Neill held another extensive proceeding. This time he heard testimony from both the surgeon and a pediatric psychiatrist. The psychiatrist testified that the child’s beliefs were sincerely held. The surgeon testified that when a patient holds this type of belief, the risk of death during surgery is significantly increased. After hearing this evidence and evaluating the child’s best interests, Judge O’Neill reversed himself and ordered that the child would not have the surgery. Once again, the matter was challenged by writ to the California Supreme Court, which, once again, upheld Judge O’Neill’s order — despite the fact that he issued a diametrically different judgment.

Though he is one of the smartest men on the court, his education has marked flaws. “Judge O’Neill has interesting thoughts on technology,” reports Judge England. “I recall the time he called to ask me what the ‘HUG Committee’ was all about. It took a moment to realize he meant the ‘TUG (Techno Users Group) Committee.’” Likewise, at a white elephant gift exchange one holiday season, LJO was innocently unaware of why everyone was laughing at the gift he received: the book, Fifty Shades of Grey. Upon being informed through a whispered aside, he turned fifty shades of red.

Though LJO has “retired,” he is not one to remain idle for long. He plans to teach law in the U.C. system and is looking forward to igniting the same passion for litigation in his students that he has always enjoyed. His departure from the court is bittersweet. Everyone agrees he has given more to the court and community than anyone should have to give, and he deserves to enjoy his retirement. But his retirement leaves a void that will be difficult to fill. Goodbye, LJO. We will miss you.