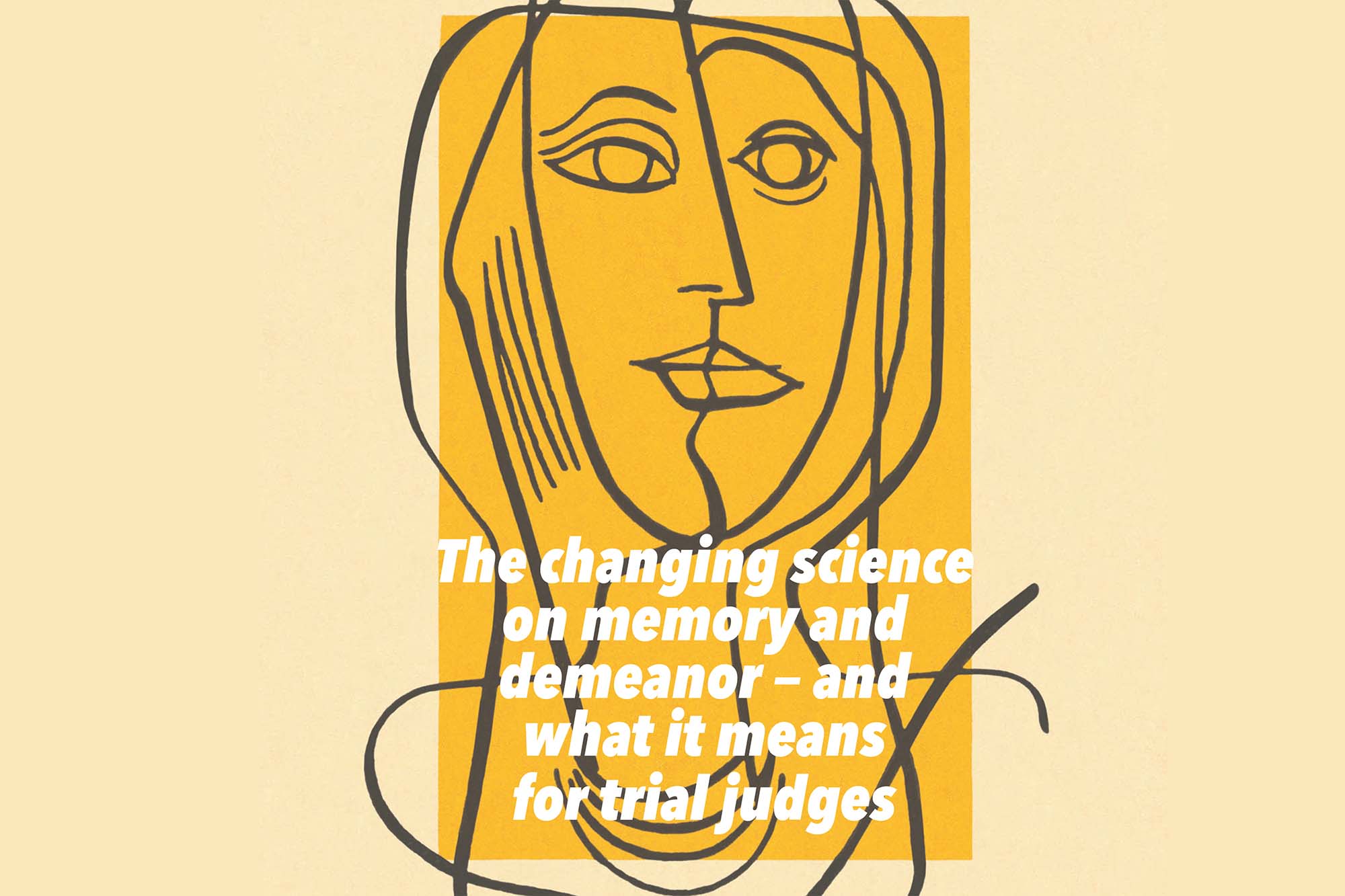 Unless my experience of trying hundreds of federal civil and criminal jury trials in five federal districts is idiosyncratic, in virtually every case, a verdict turns on the perceived accuracy of witness memory and demeanor. This also has been true in my experience with bench trials. The credibility of witnesses is front and center in civil and criminal jury trials as well as evidentiary hearings. Counsel’s ability to successfully attack the demeanor and memory of adverse witnesses is often a key turning point in the results.

However, trial lawyers get little or no help from current pattern instructions on how juries should evaluate witness credibility. So, I suggest trial judges spring into action and do something. That something follows. The soul of America’s civil and criminal justice systems is the ability of jurors and judges to accurately determine the facts of a dispute. This invariably implicates the credibility of witnesses. In making credibility determinations, jurors and judges necessarily decide the accuracy of witnesses’ memories and the effect of the witnesses’ demeanor on their credibility.

Almost all jurisdictions’ pattern jury instructions about witness credibility explain nothing about how a witness’s memories for events and conversations work — and how startlingly fallible memories actually are! They simply instruct the jurors to consider the witness’s “memory” with no additional guidance. Similarly, the same pattern jury instructions on demeanor seldom do more than ask jurors to speculate about a witness’s demeanor by instructing them to merely observe “the manner of the witness” while testifying. Yet, thousands of cognitive psychological studies have provided major insights into witness memory and demeanor, creating new cognitive psychological principles that are now widely accepted as the gold standard about witness memory and demeanor. These principles are often contrary to what jurors intuitively, but wrongly, believe.

Most jurors believe that memory works like a video camera that can perfectly recall the details of past events. Rather, memory is more like a Wikipedia page where you can go in and change it, and so can everyone else. Memories are so malleable, numerous, diverse, and innocuous that post-event information alters them, at times in very dramatic ways. Memories can be distorted, contaminated, and, even, with modest cues, falsely imagined. For example, an extremely small universe of people has highly superior autobiographical memory (“HSAM”). These people can recall past details (like the color of the shirt they were wearing on Aug. 1, 1995) from memory almost as well as a video camera.

HSAM individuals’ memories are not infallible, however. In one study, HSAM participants falsely remembered seeing news film clips of United Flight 93 crashing in a field in Pennsylvania on Sept. 11, 2001. No such film clips exist. In one interesting study, students on a college campus were asked to either perform or imagine certain normal and bizarre actions: (1) check the Pepsi machine for change; and (2) propose marriage to the Pepsi machine. Two weeks later, the students were tested and demonstrated substantial imagination inflation leading to false recognition of whether they performed or imagined the actions. Thus, not even individuals who are shown to have superior memory are immune to memory distortions.

Few legal principles are more deeply embedded in American jurisprudence than the importance of demeanor evidence in deciding witness credibility. Historically, demeanor evidence is one of the premises for the need for live testimony, the rule against hearsay, and the right of confrontation under the Sixth Amendment to the United States Constitution. Yet, cognitive psychological studies have consistently established that the typical cultural cues that jurors rely on — including averting eye contact, a furrowed brow, a trembling hand, and stammering speech, for example — have little or nothing to do with a witness’s truthfulness. Also, jurors all too often wrongly assume that there is a strong correlation between a witness’s confidence and the accuracy of that witness’s testimony. Studies have determined that jurors’ perceptions of witness confidence are more important in determining credibility than the witness’s consistency or inconsistency. Another series of studies indicate that, in reality, demeanor evidence predicts witness truthfulness about as accurately as a coin flip.

Once the fact-finder makes credibility determinations, it is nearly impossible to overturn those decisions on posttrial motions or appeal. The secrecy with which credibility determinations are made promotes the legitimacy of fact-finding, but it also shrouds countless failings. Despite years of overwhelming consensus among cognitive psychology scholars and numerous warnings from thoughtful members of the legal academy, judges have done virtually nothing to identify or to begin trying to solve this serious problem. The one exception is eyewitness identification of suspects in criminal cases, where several state supreme courts have relied heavily on cognitive psychological research to craft better, science-based, specialized jury instructions.

In a longer law review article in the American University Law Review, I examine and analyze the often amazing and illuminating cognitive psychological research on memory and demeanor. The article concludes with a Proposed Model Plain English Witness Credibility Instruction that synthesizes and incorporates much of this remarkable research. I suggest my model instructions, which I have now used in every one of my civil and criminal jury trials since 2014 without a single objection, will provide trial lawyers with a new tool for assisting in the development of a theme and in providing a basis for a stronger attack on witnesses’ credibility and demeanor, especially in closing argument. As an aside, because I fully instruct with final instructions before opening statements and give each juror a set of the written instructions with a table of contents, in every civil and criminal trial, my model instructions on witness memory and demeanor are even more powerful.

My model instructions appear in full at the end. Judging witness credibility is key to the proper functioning of our nation’s criminal and civil justice systems. Research summarized in my law review article calls into question whether judges are currently giving jurors the necessary tools to perform this critical task to the best of their abilities. The overview of cognitive psychological studies on witness memory and demeanor demonstrates the significant attention social scientists have given to problems with witness memory and demeanor as tools for judging credibility.

Unfortunately, judges still instruct on these issues the same way they have for a century, and thus give jurors virtually no information on these important principles.

Overwhelmingly, studies based on solid cognitive psychological principles reveal that memory can be distorted, contaminated, and even falsely imagined and recalled. Scientific research on witness demeanor clearly establishes that common cultural cues used by jurors, including the confidence of witnesses in their own testimony, are not meaningful proxies for the accuracy or truthfulness of that testimony. Indeed, common juror misconceptions about witness memory and demeanor are often contrary to the now well-established cognitive psychological principles examined in my law review article.

As a solution, I offer the Model Plain English Witness Credibility Instruction, incorporating contemporary cognitive psychological principles. Trial lawyers would be wise to urge trial judges and members of their respective pattern or model jury instructions committees to adopt new instructions incorporating these generally recognized cognitive psychological principles regarding witness demeanor and memory. Too many current pattern instructions not only ignore these principles, but are contrary to them. Trial judges, too, need to take the lead in revising and adopting new plain English jury instructions on witness credibility and demeanor that are consistent with these principles.

My suggested Model Plain English Witness Credibility Instruction is just a first attempt at improving the current practice. Wiser trial judges than I will certainly improve upon this modest beginning.

You may believe all of what any witness says, only part of it, or none of it. In evaluating a witness’s testimony, consider the witness’s

In evaluating a witness’s testimony, also consider the following:

If the defendant testifies,

You may give any witness’s opinion whatever weight you think it deserves, but you should consider