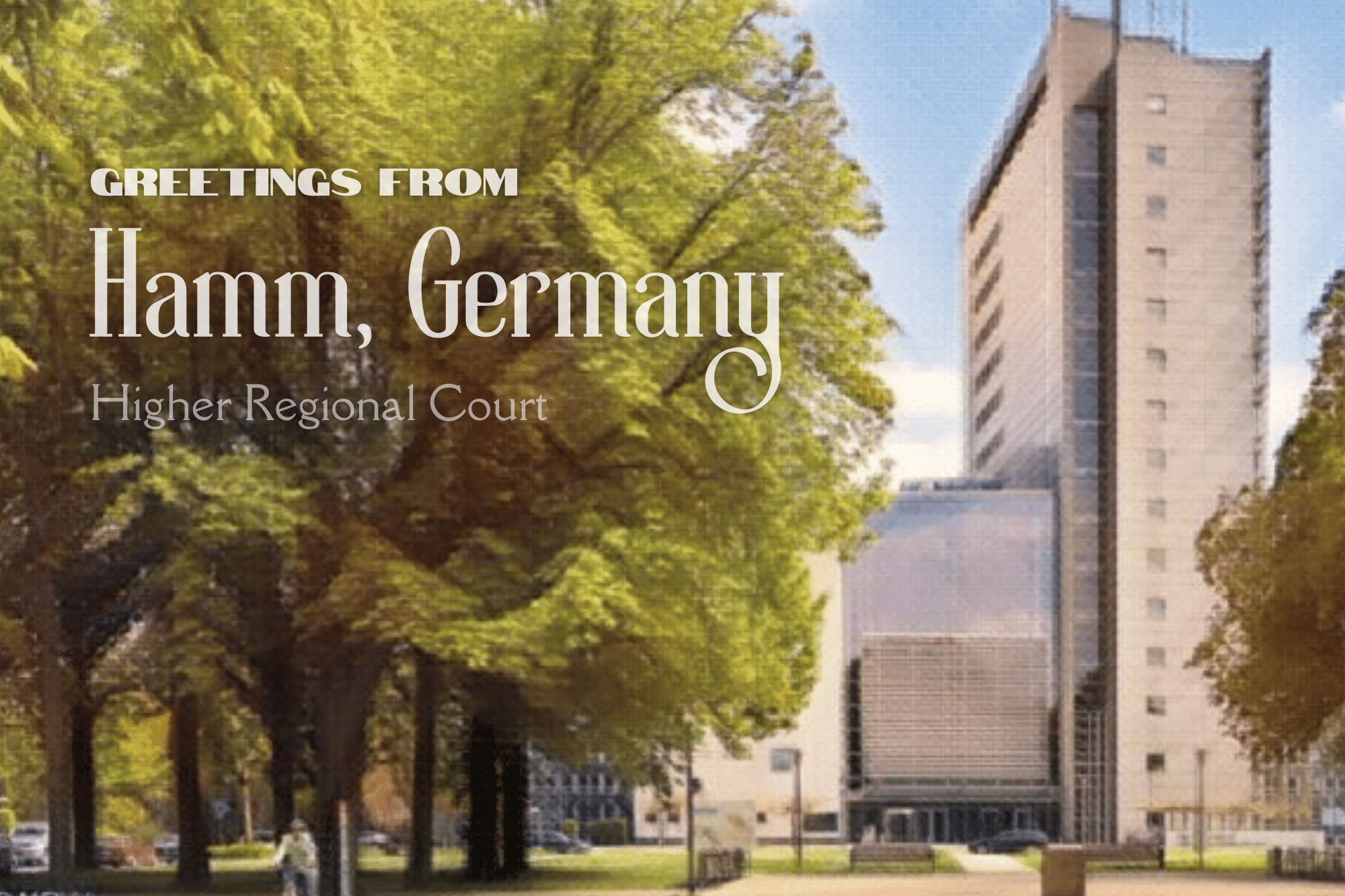 In Judicature International’s Postcard Series, judges from around the world answer a series of questions about the structure of their court, challenges they face, unique experiences, and interactions on the bench. This postcard was sent from Judge Julia Dhom, Judge at the Higher Regional Court in Hamm, Germany. 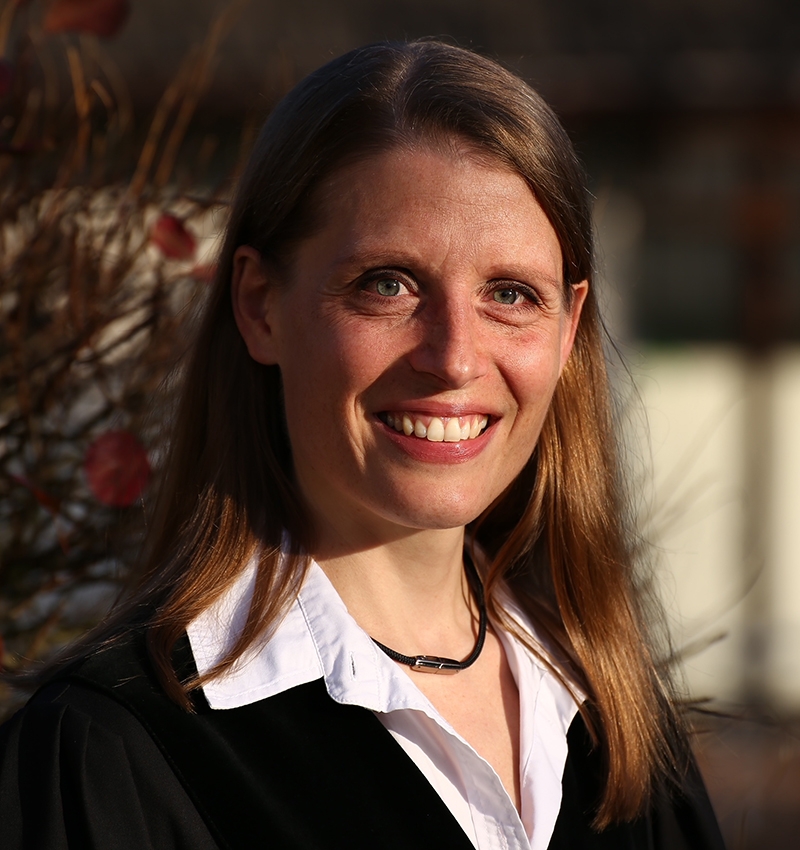 In general, the German court system has three levels. After a first decision issued by an Amtsgericht (Local Court) or a Landgericht (Regional Court), there is the Berufung or Beschwerde (second instance appeal) to the Landgericht or the Oberlandesgericht (Higher Regional Court), depending on which court issued the first ruling and on the field of law. Then there is the Revision or Rechtsbeschwerde (review appeal or third instance appeal) mostly to the Bundesgerichtshof (Federal Court of Justice).

In criminal cases, the Higher Regional Court either acts as a first-instance court in certain cases of more comprehensive significance to the country (§ 120 GVG) or as third and final instance regarding minor offenses (§ 121 GVG).

To become a judge or a lawyer in Germany, you must study law at a university for usually four to five years and pass a first Staatsexamen (exam issued by the State) consisting of various written exams and an oral exam. Subsequently you have to go through a two-year Referendariat (legal clerkship) at different judicial institutions (court, department of public prosecution, administrative agency, lawyer’s office) and then pass a second Staatsexamen. Afterwards, you need no further training to be able to be appointed as a judge, though in general only applications of the top 25 percent of graduates have real chances of success. For the first three to five years, young judges serve as Proberichter (probationary judge) at different first-instance courts before they can apply for a lifetime appointment to a specific Local or Regional Court.

After being appointed, judges are evaluated on a regular basis and whenever they apply for a lifetime appointment or promotion to a higher court. To become a Judge at the Higher Regional Court, you must have worked as a lifetime-appointed judge for at least five years and then go through an Erprobung. This means you have to work at the Higher Regional Court for nine months and earn a recommendation to be promoted to that court.

As determined by the German Constitution (Art. 97 Grundgesetz), “Judges shall be independent and subject only to the law.” Therefore judges are not only independent in their decision-making, but also free to choose when and where to do their work. In particular, it is not allowed to make judges work a certain number of hours or at a given time. A judge working full-time is expected to work about 40 hours a week, which means that his/her workload is determined by an evaluation as to how many cases a judge is able to handle within this timeframe.

The German Constitution also rules that “No one may be removed from the jurisdiction of his lawful judge” (Art. 101 Grundgesetz). Following this rule of the gesetzlicher Richter (lawful judge), every court needs to have a specific and predetermined set of rules as to which case is heard by which judge or panel of judges and who will substitute if a judge is prevented from hearing a case because of vacation or sickness. This set of rules, called the Geschäftsverteilungsplan (case allocation system), is enacted every year by the Prädisium, a committee of judges elected by all judges of the court every four years. This case allocation system can be adapted during the year if necessary, but only for good reasons that have to be given in the respective decision.

A judge’s salary in Germany is determined by law. As mentioned before, a judge working full time is assumed to work about 40 hours per week, and his/her workload is determined on that basis. Therefore his/her salary will not change whether it actually takes him/her more or less time to finish his/her work or whether, at the end of the year, it turns out that following the case allocation system he/she actually handled more or less cases than predicted.

Rules for recusal are incorporated in the civil as well as the criminal rules of procedure.3 If a judge is asked to recuse and he/she thinks the motion is justified, he/she can recuse without further ado. Otherwise, by law the substitute judge would rule on this motion. In general this substitute judge would also be the person designated to take over the case if the motion to recuse is granted. To avoid any kind of conflicting interests at this point, the Präsidium can determine other rules in the case allocation system as to who decides on the motion to recuse or who has to take over the case if the motion is granted.

To appear before the Higher Regional Court, parties have to be represented by a lawyer. So, outside the court hearing, judges primarily interact with lawyers.

In civil and family law cases, oral arguments are generally prepared in writing comprehensively. Therefore, in preparation of the hearing, lawyers’ briefs are entered and exchanged and the court notices the parties of any missing facts or documents.

Since a comprehensive reform of the German Rules of Civil Procedure in 2002, the Berufung as first level of appeal no longer involves review de novo, but only review for error. Therefore, the first appellate court is required to accept factual findings of the first-instance court “unless specific indications give rise to doubts as to the court having correctly or completely established the facts relevant for its decision, and therefore indicate the necessity for a new determination of facts.” Furthermore, there are only very narrow exceptions as to when new means of challenge or defense can be admitted before the court of appeal (§§ 529 I, 531 II ZPO).

In another 2002 reform, the appellate court can now dismiss an appeal by simple court order without oral hearing if the appeal was not filed correctly, or if the court unanimously finds that the appeal obviously has no merit, the case does not raise an issue of fundamental significance, and neither the development of the law nor the preservation of a unified legal practice require a decision of the Federal Supreme Court (§ 522 ZPO).

If an appeal is not dismissed by such a court order, the presiding judge will summon the lawyers and — on a regular basis — the parties for oral arguments. The parties are mostly summoned to the hearing to clarify facts if necessary and to discuss the possibility of a settlement, as the court is required to work towards a settlement at any stage of the suit.

In your personal experience, how would you describe the general public understanding in your community of your role as a judge and your day-to-day work? Do you feel that people have a high level of trust in the judiciary?

From my personal experience, people generally expect judges to be smart and even-tempered personalities that encounter their cases and parties openly and without bias. Most people have no general experience before courts, so the only pictures they have in mind are fictional court hearings they see on TV in which the most complicated issues are solved by a single judge in one hearing and within an hour. So many people are surprised when I tell them about how much of my work actually takes place outside of the courtroom. I have to comprehensively prepare for the court hearings and decide what evidence has to be taken in the case,4 and after ruling I have to give written reasons for my decision (§§ 313, 540 ZPO).

In general, I think that people do trust the judiciary. But in my experience I get the impression that people find it more and more difficult to accept the consequences of their actions. Therefore I feel that it is getting more difficult for people to understand our decisions. Though judges usually give detailed reasons for their decisions in writing after also explaining their view of the case during the court hearing, parties still often find it hard to accept the ruling if it is not in their favor. And if, as a result of that, they don’t really feel heard by the court, their trust and respect for the decisions decreases.

1. Gerichtsverfassungsgesetz = Courts Constitution Act. In German law, sections of statutes are called “paragraphs” and abbreviated as “§”; subsections are put in roman numerals behind the number of the section. Official translation by the Federal Ministry of Justice: https://www.gesetze-im-internet.de/englisch_gvg/index.html.

4. In Civil Cases before a German court the judge acts as fact finder, who — based on the parties’ submissions — decides what evidence has to be taken and also examines witnesses and experts.